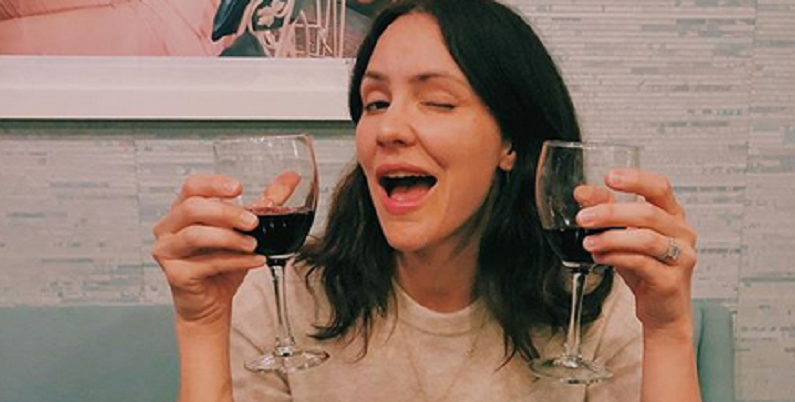 On Thursday night’s episode of The Real Housewives of New York City, Luann de Lesseps changed up her look. She gave herself bangs. Ramona Singer compared her to American Idol alum Katharine McPhee. She was shocked when she saw Luann in the wig.

“You look like a totally different person,” she said in the latest episode. “Wait. You know who you look like? That famous actress who married the older gentleman. McPhee! You look like McPhee!”

The internet quickly figured out that Ramona meant Katharine McPhee. Luann took that as a huge compliment. “Oh, Kristen McPhee, really?” she said, getting Katharine’s name wrong. “That’s a compliment.” Read on to see what Katharine has to say about the comparisons.

The singer must be a huge fan of RHONY. During the episode, she tweeted about that scene. Even though Luann got Katharine’s name wrong, she had a great sense of humor about it.

“Thank you @CountlessLuann,” Katharine tweeted. “Kristin McPhee and I love you! #RHONY.”

Although Katharine enjoyed that moment, her husband David Foster had a different reaction. Ramona couldn’t remember his name, which annoyed him when he was previously married to Yolanda Hadid.

Thank you @CountessLuann. Kristin McPhee and I love you! #RHONY pic.twitter.com/x8FnRWqVRX

Yolanda appeared on The Real Housewives of Beverly Hills and David didn’t like being known as her husband.

“I would get, and still get, ‘You’re on Real Housewives of Beverly Hills,'” David revealed in his new documentary David Foster: Off the Record. “What I want to say is, ‘Hey, I got f***ing Grammys, okay? I’ve sold half a billion records. F*** that show.'”

The acclaimed music producer didn’t like being associated with the reality show. In an interview with the Los Angeles Times, he revealed, “The Beverly Hills Housewives was just kind of a nightmare for me and something that I really wish I hadn’t been part of.”

Well thank you @countessluann, Kristin McPhee and I love you! 😂

David recalled moments when the media was more interested in RHOBH than his musical accomplishments.

“And first question: ‘So, what’s Lisa Vanderpump really like?’ It was all about the Housewives,” he told the Los Angeles Times. “I want to say, ‘I’ve got 16 Grammys, b****!’ But I didn’t. she really had no clue about my musical history at all. She only knew me on that show.”

In that same interview, David said he didn’t understand why people loved that show so much.

David Foster did not divorce Yolanda Hadid because of Lyme disease

The man married to Katharine McPhee claims he didn’t divorce Yolanda Hadid because she had Lyme disease. In the documentary, he revealed that they divorced for a different reason, which he kept secret. But he insists that “it had nothing to do with her being sick.” David revealed more of his disdain for the RHOBH series, which could be the real reason behind their marriage.

He added that “Yolanda wanted to do the show. I didn’t want to be the guy to say no.”

🎼-happy anniversary to the love of my life!! Last summer at the beautiful Miramar!!

Amy King Teases That Jill Duggar May Be Working On A Tell-All Book
Courtney Waldrop Rushes Rawlings To Hospital, Leaves In A Cast
See New Photos Of Lawson Bates Like You’ve Never Seen Him Before
Derek Hough Reflects On His Long History With ‘Dancing With The Stars’
Meri Brown Gets Cryptic About ‘Being Broken,’ Is She Alright?