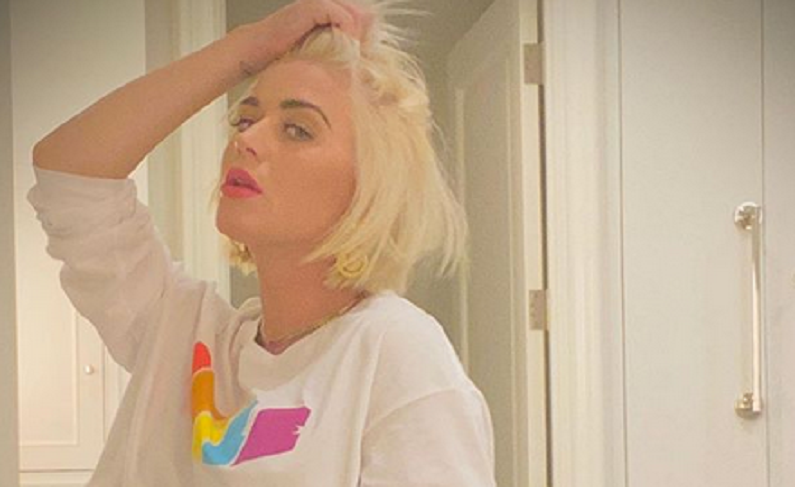 Katy Perry “secretly dedicated” a new song to her baby girl. She’s looking forward to her daughter hearing it. The pop star is gearing up for the slow release of her fifth studio album Smile. She also plans to welcome her first child with fiancé, Orlando Bloom, later this summer.

Katy has a lot of things to look forward to. This is great news since she had to postpone her Japanese wedding due to the coronavirus pandemic. She wants to focus on releasing music and having a happy and healthy baby girl. During a recent interview, Katy revealed which song she’s excited for her daughter to hear someday.

The singer made a virtual appearance on SiriusXM’s Celebrity Session on Tuesday, July 28. Katy Perry gave a live performance and answered fan questions. She also teased which song on her new album she’s most excited for her unborn daughter to hear. The empowering track is called What Makes a Woman and includes a message that she hopes her daughter will take with her throughout her life.

“It’s a song about how you are gonna have a tough time measuring what truly makes a woman because women are so many things,” Katy revealed. “And I like to say not one thing, not just one thing. And such chameleons, and so adaptable, and so malleable and transformative. And can handle the weight of the world on their backs and do it all in heels. And make it look pretty effortless sometimes.”

The 35-year-old singer also revealed that it’s a special experience to record new music while pregnant. Katy “secretly dedicated” the track to her unborn baby. She felt empowered by the track and the entire album as a whole.

“I feel very empowered creating a life and being a working woman whilst doing that,” Katy explained. “It’s like, can you create limbs while promoting a record? Hello!”

This isn’t the first time that Katy has talked about the song. Last month, she teased the emotional track, which she said is “important to me and important for her [daughter].”

Katy Perry previously announced that her upcoming album is not set for release on Aug. 14 as intended. She took to her social media platforms to make the announcement to her fans. Katy said “unavoidable production delays” were to blame for the setback release. The album will now drop two weeks later on Aug. 28.

Welp. I hate to throw this bad news at you like a pie in the face…but if there’s anything 2020 taught me, it’s to not get too attached to plans and be malleable. Due to unavoidable production delays, my album #SMILE will now be released ✌🏻weeks later on August 28 ☹️ To make this up to you, starting this Sunday (Aug 2) and until the album drops (or until #Babycat 🤰🏼…whichever comes first 🙃😬) join me for #SmileSundays! Every Sunday, time TBA soon, I’m going to go on LIVE for 30 minutes or more and talk all things 🙂SMILE🙂 you’ll see new merch… I’ll play some snippets… maybe we’ll go live together… we’ll def have a good chat! Clowns-n-Cats – Thanks for being so flexible in this time… it’s a wild one, for sure, but I hope the patience will be worth the wait! ♥️🤡 Love, Katy

However, Katy doesn’t which will come first: her new album or the birth of her baby. But she’s still planning some new things for fans. She announced her new #SmileSunday sessions, which start on August 2.

In her latest message, Katy thanked her fans for “being so flexible in this time.” She also called these times a “wild one,” but that “the patience will be worth the wait.”

Here I am, about to launch #SmileSundays! 🚀 Join me on Sunday at 11am PT / 2pm ET at live.katyperry.com for all things that might make you smile 😁 We’ll chat about the record, I’ll share some exclusive information, maybe play song snippets…looking forward to a little Sunday Funday with y’all! ♥️

Smile will be available on all of the streaming platforms on Friday, August 28.

Amy Slaton Gets A Lovely New Ring
‘Mystery At Blind Frog Ranch’: Paranormal Or Paranoia?
’90 Day Fiance’: Jenny Leaves, Sumit And Parents Say She Looks Old
‘MAFS’: Is Virginia Too Much Of A Party Girl For Erik?
What Is Josie Bates’ 1-Year-Old Daughter Willow’s Favorite Word?