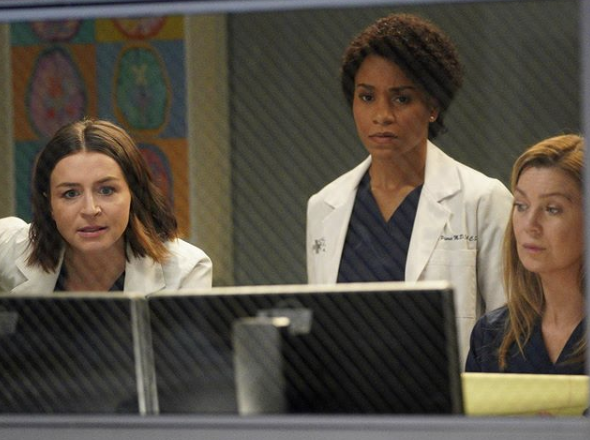 There’s still no word on when we can expect to see Grey’s Anatomy Season 17, but the creative teams are still hard at work. TVLine confirms Richard Flood (Dr. Cormac Hayes) received a promotion to series regular. What will these mean for Meredith Grey’s love life? Our favorite surgeon could be headed for yet another love triangle.

Last season’s storylines involved Meredith’s on and off again boyfriend, Dr. Andrew DeLuca, dealing with his mental illness. Meanwhile, Meredith and Dr. Hayes have been growing closer. Fans are torn. And at this point, it really could go either way. Even showrunner Krista Vernoff hasn’t made a firm decision yet.

“I’m at the point with that story where I don’t know who I am rooting for,” Vernoff says in an interview with TVLine. “I don’t know if I think that DeLuca is rising to a level of dark and twisty and life experience that makes him somehow a [suitably] mature partner for Meredith. Or if all that Hayes has been through in his life already makes him her equal. I am delighted to have such a conundrum.”

In addition to Richard Flood, Anthony Hill will join the cast as a series regular. You may remember him as Dr. Winston Ndugu, someone from Maggie’s past. The chemistry was obvious. Perhaps this is the great distraction Maggie needs to finally move on from Jackson.

We’re so excited to welcome @richardfloodofficial and @anthilll as series regulars on #GreysAnatomy! 👏 Read more at link in bio.

And lastly, we will be losing Stefania Spampinato (Dr. Carina DeLuca) to Station 19, Grey’s sister show. Carina is Andrew DeLuca’s sister and coworker, but we haven’t seen much of her lately. She’s been spending a lot of time getting friendly with Maya Bishop on Station 19. It makes sense to move Stefania’s character over to the other show.

Characters from Grey’s Anatomy and Station 19 frequently crossover onto the other show, so we may not have seen the last of Carina. Especially since her brother is caught up in a love triangle with Meredith Grey.

As with many other of our favorite television shows, Grey’s Anatomy filming and production are on hold indefinitely. However, Krista Vernoff already confirmed Season 17 will deal with Coronavirus.

“We’re going to address this pandemic for sure,” Vernoff tells us. “There’s no way to be a long-running medical show and not do the medical story of our lifetimes.”

Even though Grey’s will be centered around a very heavy topic, we have no doubt they will make room for the steamy love triangles. After all, what is Grey’s Anatomy without romance and drama?

Make sure to keep checking back with us. We’ll be sure to update you as soon as we have any more developments about Grey’s Anatomy Season 17. In the meantime, let us know who you think Meredith should choose.