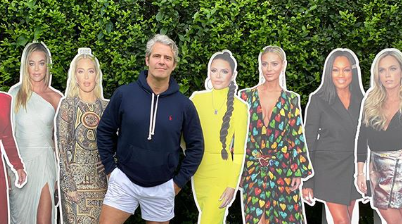 Andy Cohen went on a recent episode of The View where he poured all the Real Housewives tea. Fans were thrilled to hear about who might not be coming back and who might be drinking too much. He started it off with a big headline talking about whether Denise Richards will be back on the show. A lot has gone on with Richards lately, but the biggest thing is Brandi Glanville’s claims she hooked up with the married housewife.

This is something Denise has denied over and over. Andy said about The Real Housewives of Beverly Hills, “I haven’t made any decisions about next season but I hope Denise will be back.” He also said, “Brandi was not at the reunion and I think that was part of the reason that Rinna was unhappy.”

While Denise continues to deny it happened, Brandi has doubled down. She’s produced text messages and even sworn on her children it happened.

Andy Cohen Continued To Talk About Denise And Brandi

Andy Cohen continued to talk about Glanville and her role on the rest of the season. He said, “you will be hearing more from Brandi. There are two sides to this story, maybe three, and it’s one of those kind of mysteries that will continue to play out as the season goes on.”

Switching gears to the cast of The Real Housewives of New York he said during the reunion the ladies’ drinking habits will be discussed. He said, “they do talk about it a lot and they each have a complicated relationship with alcohol and it will definitely be discussed. There’s no way we couldn’t talk about it.” Megan McCain said someone worried about the furture of the show when Bethenny Frankel left. Andy said he’d also been concerned according to Reality Blurb.

This #RHONY Reunion was short on drama, but lots of laughs

The Effects Of COVID-19 On Production

He said, “it touches the women very, ugh… I don’t want to give anything away but a few… It touches some of the women personally and there’s a lot of conversation about it. It is very much a part of it and it mirrors what’s happening in the country.”

So far, Real Housewives of Orange County fans know Shannon Beador and three of her kids all have the coronavirus. It’s going to be interesting for fans to see how the filming goes for each of the franchise’s locations. Instagram pictures showed the ladies of RHOD in face shields as they were out and about. There’s no denying things in reality television world are going to be different for a while.