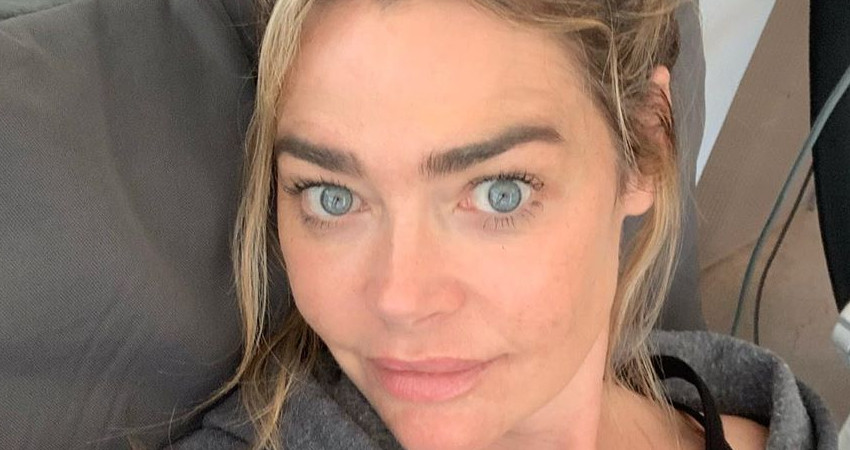 Another season, another tense dinner confrontation on The Real Housewives of Beverly Hills. Teddi Mellencamp called Denise Richards out on the July 29 episode for allegedly gossiping about her and the other women to Brandi Glanville. That conversation led to Teddi outing Brandi’s allegations of an affair with Denise, much to the shock of the RHOBH stars not in the know.

The episode featured one of the more explosive moments in the Season 10 trailer. Denise repeatedly saying, “Bravo, Bravo, F**king Bravo” to stop the cameras from having footage they could air. However, as viewers have seen this season, the disruptive tactic no longer works. Bravo airs the footage anyway, breaking the fourth wall.

Teddi Confronts Denise About Bad Mouthing Her to Brandi Glanville

In the July 22 episode, Brandi gave Kyle Richards and Teddi Mellencamp the details over her alleged affair with Denise. Brandi says that the two hooked up when she was visiting Denise on the set of a movie. Additionally, Brandi believed that Denise had an open marriage. It was only after the alleged hook-up that she found out otherwise.

Before telling Kyle and Teddi about the affair, Brandi told them how Denise called her the night before Kyle’s party. According to Brandi, Denise said some harsh things about her RHOBH co-stars, including Teddi, Lisa Rinna and Erika Jayne.

Literally hours after hearing this from Brandi, Teddi and the other RHOBH stars headed for a trip to Rome, Italy. The awkwardness of what Brandi said came to a head for Teddi during a group dinner. Among things Denise supposedly said include calling Teddi pathetic. Denise also allegedly said that Teddi lives in her father’s shadow.

As RHOBH fans know, Teddi is the daughter of music icon John Mellencamp.

Denise immediately denied saying anything about Teddi or the other women to Brandi. However, Teddi then hinted that Brandi said that something “really bad” happened between her and Denise, meaning the affair.

At that point, only Kyle, Teddi and Lisa knew about the affair allegations. Lisa said in a confessional that she didn’t want to be the one to repeat what Brandi said. She told Kyle and Teddi that it was up to them to tell Denise. After all, they were the ones who heard it directly from Brandi.

The other RHOBH stars at the table didn’t know what Brandi said about Denise. However, they felt that Denise had a right to know. To that end, Dorit Kemsley and Garcelle Beauvais encouraged Teddi to spill it.

Eventually, Teddi spit it out: Brandi said she had been intimate with Denise. Dorit was especially shocked by this turn of events.

Denise’s first reaction was to laugh, thinking they were kidding. However, once she realized they were serious, she denied it completely.

Sutton Stracke said in a one-on-one interview that she heard the rumor months ago from someone else. However, she doesn’t think it’s proper dinner table conversation.

Despite her denials, Denise’s RHOBH co-stars tried to goad her into a reaction. Eventually, a flustered Denise uttered the magic words. “Bravo, Bravo, Bravo.”

Those three little words were supposed to make the footage unusable. Denise explained in May that Kyle told her about the stall tactic and other RHOBH stars have used it before.

Per Us Weekly, Teddi vents in her confessional that Denise has used the tactic several times throughout Season 10. She says,

The editors then aired previously unseen footage of Denise using the “Bravo, Bravo, Bravo” tactic weeks earlier during an argument with Kyle.

The women agree that the conversation can’t be resolved over dinner and head to bed. As Denise is leaving, she is heard on the microphone saying that Bravo won’t air the footage if they want her to stay on the show. She also remarks that she needs to call her lawyer.

In the preview of next week, Denise has some tea to spill about Brandi to her RHOBH co-stars. People reports that Denise turns the tables. She tells the other women that Brandi has made affair allegations about others in the group, as well.

Tell us in the comments if you think Denise’s denials were genuine or if she is lying about the affair.

The Real Housewives of Beverly Hills continues Wednesdays on Bravo.