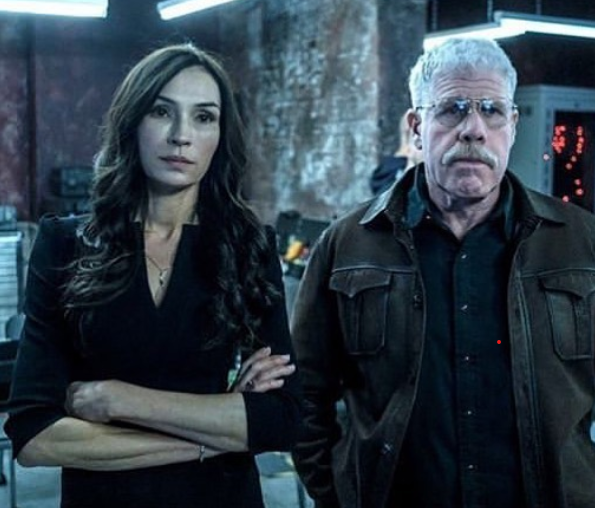 Technology drives the world today. Cameras and surveillance make people feel safe in the knowledge that someone is watching. But, what if that technology was turned against you? The Capture, written and directed by Ben Chanan, is a short original series on Peacock streaming service that asks that very question. It’s changed how Famke Janssen lives her life.

The Capture follows Holliday Grainger as Detective Inspector Rachel Carey. Carey is investigating an assault and possible kidnapping of a woman. She arrests Lance Corporal Shaun Emery (Callum Turner) for the crime. The evidence against him includes camera footage “showing” him assaulting the woman. However, Carey learns everything is not as it seems and technology may not be as reliable as people think. She further discovers that the evidence was tampered with and that the camera footage of Emery was fabricated. Carey realizes she might have arrested an innocent man and has to figure out who might have framed Emery and why.

Comi-con@Home hosted a virtual panel of the cast for The Capture. Famke Janssen, who plays Jessica Mallory, also admitted that the series has made her more aware of her surroundings. She said, “I’ve definitely started noticing cameras more than I did before.” Famke continued in the interview saying, “And I’m incredibly private as a person! I don’t do social media or anything…just to protect my privacy.” She even said, “Just knowing the ends to which people can go and how incredibly complicated it is in today’s world to have any type of privacy”.

Holliday echoed her castmate’s statement in another interview. She said, “I am definitely more conscious of surveillance, particularly on streets where I hadn’t really thought about it before.”

Co-Star Ron Perlman took it a step farther by adding, “They’re listening and they’re watching”. The former Sons of Anarchy star held nothing back saying, “[T]hey can do anything that they want with that information, depending on what kind of mood they’re in at any given time.”

Several cast members did extensive research for their roles in this series. Grainger for example spoke to multiple experts in surveillance to help her prepare. She also shadowed police during a murder investigation. The Borgias actress said the investigation was on a cold case in her area. Grainger said, “I ended up on a walk around of the crime scene in my local area […] because I knew the park better than them (police), I was just like, ‘Oh no, no, no! This is the quickest entrance; this is the nearest entrance to the pond and these are the woods.'”

Anyone can manipulate the truth today. People choose specific camera angles, they only show specific clips, and they can give an artful spin to any situation. Because of this it is scary to know that now we may not even be able to trust our own eyes. Famke Janssen also voiced her concern, “what you do and say can be used against you.”

Holliday summed up The Capture and the reality of today’s world when she said, “You can’t always judge what you see, and don’t let people hand things to you on a plate. Use your mind.”