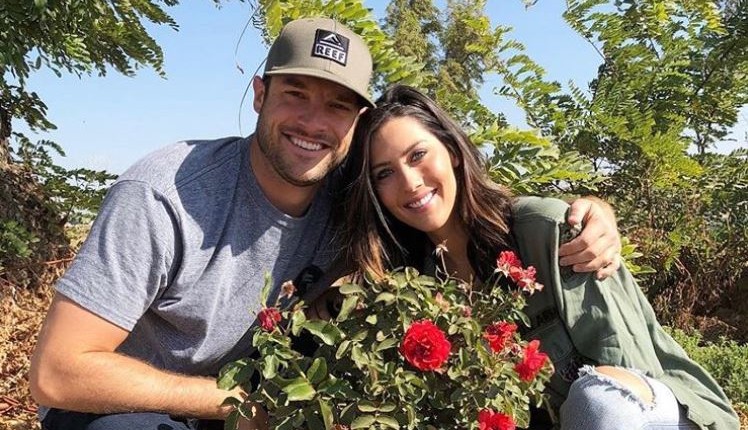 Speculation continues to mount that Bachelorette Becca Kufrin and Garrett Yrigoyen have broken up. There are multiple clues that lead fans to believe these two are no longer together. Of course neither Becca nor Garrett have addressed the rumors as they have in the past. So what is going on and what clues are fans picking up on?

Did Becca and Garrett break up?

Life and Style shared some thoughts on possible clues as to why fans think they broke up. First of all, their interactions on social media have been few and far between. They have made comments, but more than anything the comments seem friendly. He also recently liked her picture on Instagram, but no comment was made.

I’ve got an eye problem… eye can’t see myself not living in the mountains.

It is pretty common Bachelor knowledge that contestants must be together two years to keep the expensive Neil Lane engagement ring. As it turns out, Becca and Garrett’s two year anniversary of their final rose ceremony TV air date is August 6. While they have been technically been together for two years in May, the final episode did not air until August 6. Are they waiting to announce a split until after this date? Many fans think this could be the case.

Plus, many fans have spotted Becca without her engagement ring on in Instagram Stories. While this doesn’t mean anything, it is definitely a possibility it means something more.

Feeling really grateful for all of the strong, supportive and courageous women in my life. Let’s build one another up and continue to spread the love we have. Thanks for challenging me @tiarachel91 and @brookekarzen #challengeaccepted #womensupportingwomen

Becca went so far in mid June as to say she didn’t know if she still saw a future with Garrett. At the time Becca said, “I want to say to our listeners out there — because I’m sure many will hear this back and wonder and ask and have opinions — for those who are curious about my relationship with Garrett at this point, all I can say right now is I don’t know.” She continued, “I can’t give anything more than that. It’s something that we are trying to work through and discuss and do work on at home at this time and that’s where the work will remain and that’s really the best can give you at this point.”

Many think this was the beginning of the end. Obviously all of this is just speculation and everyone will have to wait until Becca and Garrett comment. However, in the past, Becca was quick to shut down haters and rumors. Now, neither have spoken out about their ongoing issues. What do you think?