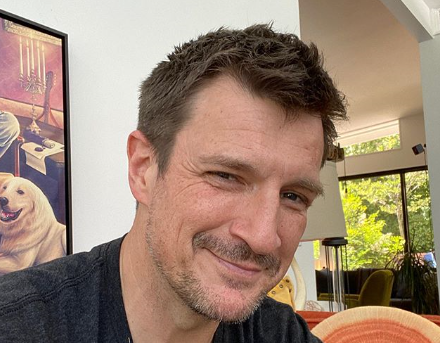 In a virtual panel for Comic-Con @ Home they had, “A Conversation with Nathan Fillion.” In it, he talked about all his shows including Firefly, Castle, and Dr. Horrible’s Sing-Along Blog among the top shows of fans. He had a new feature that was a bit shocking, a mustache channeling Tom Selleck.

Nathan has been a staple and a fan favorite at Comic-Con for years. He keeps choosing projects that get a cult following. He talked about the first Comic-Con he went to as a guest of Joss Whedon after he signed on for Firefly. In his kitchen with his dog, he talked about his shows and some of his popular movies.

He said he wanted to ask him about something he was probably asked about at every Comic-Con, the movie, Waitress. He said, “I thought it would be a quirky fun little movie, but it resonated so deeply with people.” Alexi also mentioned Fillion was on Buffy and he revealed he’d actually auditioned to play Angel and he didn’t get it.

It was bound to happen.

Nathan Fillion Had Others Zoom In To Chat As Well

The panel was moderated by The Rookie showrunner, Alexi Hawley. Along with Nathan Fillion; Joss Whedon, Alan Tudyk, and Gina Torres joined in to talk about Firefly. According to Deadline; Seamus Dever, Jon Huertas, and Molly Quinn joined to talk about Castle. When talking about Castle, the cast agreed they brought families together; younger kids and parents loved it. Molly said being on Castle and comparing it to other sets is like, “getting to go to heaven first and then coming back to Earth.”

Fillion, Tudyk, and Torres all agreed, “once a ‘browncoat’, you’re locked in,” they said about the legacy of Firefly. Fillion said, “Firefly has been my favorite job I’ve ever had until The Rookie. like any great book that touched you and had an impact on you the first time you read it. Then when you read it later it speaks to a different place to your heart and psyche.”

Joss and Nathan talked about Dr. Horrible’s Sing-Along Blog and how it was a response to the writer’s strike. The musical featuring Neil Patrick Harris is still a cult favorite. At the time people didn’t think something on the internet would take off, and it did quite well.

The Firefly Star Loves All His Co-Stars

Nathan Fillion talked about having Tudyk, Huertas, and Dever guest-starring on The Rookie. Torres guest-starred in Castle. Fillion said he wanted Torres on The Rookie too, but she had one request.

She said, “You have to promise you’ll actually be there! When I came on to Castle you bailed!” Fillion looked to showrunner, Hawley, who said, “there’s no way I would put you on the show and not write you into Nathan’s story.” You can watch the video below.