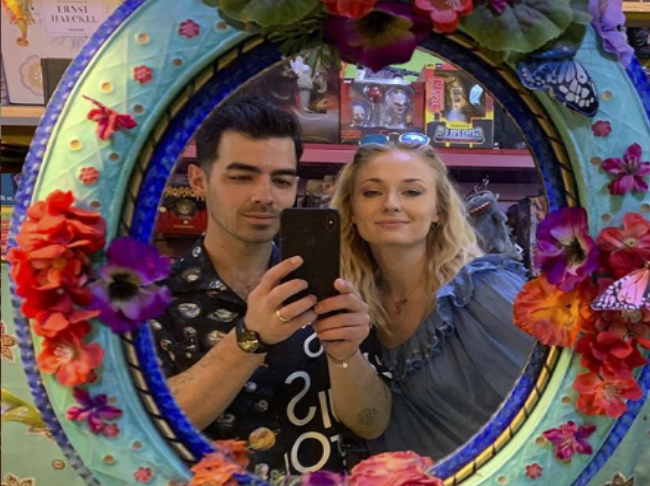 The celebrity couple recently welcomed their new baby into the world. According to reports, the baby girl’s name is Willa. Sophie gave birth quietly in Los Angeles sometime last week. There isn’t much more information to report yet. We’re sure the family is enjoying time alone with the new baby.

Could their child’s name be a Game of Thrones reference? Sophie starred in the HBO show as Sansa Stark for all eight seasons. Two minor characters appeared on the show with the name “Willa.” However, we can’t be sure they named their child after fictional GoT characters. We will have to wait and see.

The couple has tried their best to stay busy during quarantine. Insiders say they try to get some exercise by walking and going on hikes.

Sophie said in an interview, “I’m kind of loving it. I’m an introvert, I’m a homebody, if I could stay at home all day I would, so this is great for me.” She went on to say that Joe is more of a social butterfly and is struggling being at home all the time these days.

The Story of Sophie and Joe

Sophie in Joe went on their first date back in 2016. However, they didn’t make things social media official until January 2017. They fell in love quickly and got engaged in October of that year. They were married on May 1. 2019 in Las Vegas.

They had another ceremony a month later in Paris. Sophie’s Game of Thrones co-star, Maisie Williams, was the maid of honor. The Paris ceremony truly looks amazing.

Game of Thrones ended in 2019 after eight seasons. Now, Sophie is on the hunt for other roles. The Lizzie McGuire reboot is on hold for now, but Sophie expressed interest in playing a part. More specifically, she has her eye on the role of Miranda Sanchez, Lizzie’s best friend. Lalaine Vergara-Paras originated the role of Miranda, but there is no word as to whether or not she is interested in returning.

“Is Miranda appearing in this season? Because I’m here,” Sophie said. “I’m available. I am your new Miranda. Lizzie McGuire people, please reach out to me.”

There’s no word on when the Lizzie McGuire reboot will actually happen. Now with the pandemic in full swing, it seems less likely it will pick up anytime soon. However, we really hope Sophie cam snag a role if things progress.

Perhaps that is for the best anyway. Sophie will probably have her hands full tending to her new bundle of joy. We can’t wait until she posts pictures of her little one on Instagram.

If you liked this story, please make sure to regularly check in with TV Shows Ace. We’re here to report all the latest celebrity and television news. We hope to get back to you with an update soon!