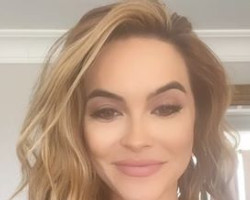 Selling Sunset Star Chrishell Stause just turned 39. But, it is unlikely she did much celebrating. In the same week as her birthday she lost her beloved mom and Netflix released the Season 3 trailer that promises so much drama that the former Days star told her legion of Instagram followers that she is in her “leave me the the “F alone bubble”!

What has been going on?

Chrishell Stause Turned 39 To No Fanfare

On July 21, Selling Sunset star Chrishell Stause turned 39. But, it doesn’t look like anyone noticed. Although a few publications mentioned her birthday birthday, she did not share any sort of photo commemorating the last birthday of her 30s. That is a pretty significant birthday. But, Chrishell had a very difficult week. It is no surprise she wasn’t popping the champagne.

On July 18, Chrishell posted that she lost her mother to cancer. She was there when her beloved mother took her last breath and passed away from lung cancer. What is especially heartbreaking is that her father died of lung cancer Easter Sunday 2019.

Sandwiched in between the death of her two parents was something that absolutely blindsided her. Chrishell’s husband of two years, Justin Hartley, filed divorce papers right before Thanksgiving 2019. While this would normally be a private matter, with only secret sources and speculation, this was not the case.

On Friday, July 24, Netflix released the Selling Sunset Season 3 trailer. There, we see everyone else finding out that Justin filed for divorce. And, we see a lot of emotional Chrishell Stause.

She pretty much confessed her state of mind with her Instagram post promoting the third season of the reality show. She wrote: “There is a much more dramatic trailer but I am gonna zip into my ‘leave me the F alone bubble’ and focus on all the hard work we put into the sale of these stunning homes. 👍🏼🤷🏻‍♀️ Season 3 streams on @netflix #Aug7#netflix #lionsgate #SellingSunset”

Chrishell didn’t want to talk about it at all. She clearly would rather move on and focus on the spectacular real estate. But, inquiring minds want to know, especially as Chrishell and Justin really had the fairy tale life. Everyone wants to know what actually happened.

There is a much more dramatic trailer but I am gonna zip into my ‘leave me the F alone bubble’ and focus on all the hard work we put into the sale of these stunning homes. 👍🏼🤷🏻‍♀️ Season 3 streams on @netflix #Aug7 #netflix #lionsgate #SellingSunset

Just a year ago things were quite different. For example, in 2019, the Selling Sunset star had a huge blowout birthday. She had a lot of her close, personal friends. This includes Melissa Claire Egan, Justin’s former Young and the Restless co-star and Chrishell’s bff. There was a lot of cake and a lot of hoopla. Not bad for a 38th birthday party.

Yet, Hartley was right there celebrating with Chrishell Stause. He was smiling and looking like he had an awesome time. No wonder Chrishell was so confused.

I just had the most magical time with the most amazing people!!! Friends, cake and dancing-what more does a girl need!? Thank you SO much for all the bday love-I’m so lucky-Feeling the love! 💗🙌🏽