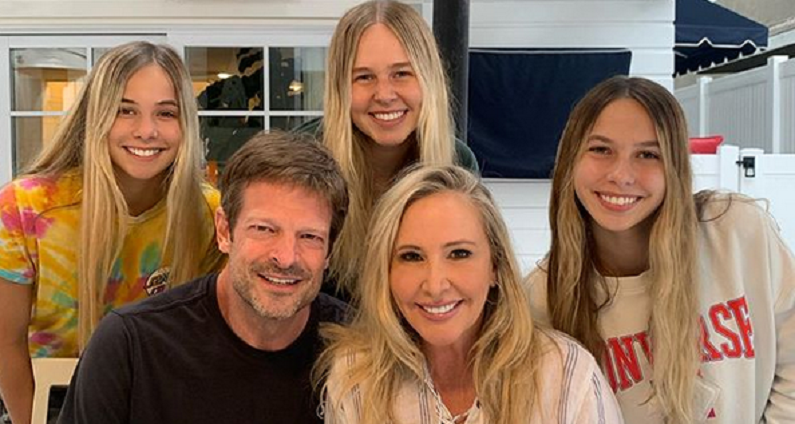 Shannon Beador revealed that she and her three daughters tested positive for COVID-19. The Real Housewives of Orange County announced on Instagram that they are “quarantining at home,” but they are “isolating in separate rooms.”

On Friday, July 24, Shannon Beador and her three daughters, Stella, Sophie, and Adeline have all tested positive for COVID-19. The reality star took to Instagram to make the announcement with a family portrait.

“This photo was taken pre-pandemic. Today, we are Covid positive times 4,” the RHOC star wrote. “The girls and I are blessed to be quarantining in the same home (but isolating in separate rooms).”

This photo was taken pre-pandemic. Today, we are Covid positive times 4. The girls and I are blessed to be quarantining in the same home (but isolating in separate rooms). A huge thank you to all of the medical personnel that have been patiently guiding us through this illness. Sending prayers to all of those affected. 🙏🏻❤️

In her post, Shannon thanked the healthcare workers for helping them through this situation. She’s also praying for those who are also battling the coronavirus. Orange County has been one of the many areas in California that have seen a rise in COVID-19 cases in the past few weeks, per People. Also, the Orange County Health Care Agency has reported 710 new cases and 13 deaths on Friday.

Shannon previously spoke out about the importance of being cautious amid the coronavirus pandemic. She reunited with her RHOC costars in May for a “social distance catch-up.”

“As a person with lung damage, my family and I take the Coronavirus and social distancing very seriously,” Shannon wrote at the time. “Apparently there is bit of negative press out there today about how the #RHOC cast assembled yesterday.”

As per Yahoo Entertainment, costar Braunwyn Windham-Burke responded to Shannon Beador with two heart emojis. However, Kelly Dodd left a strange response to Shannon’s post that has her in hot water.

As TV Shows Ace previously reported, Kelly received backlash for her insensitive comments about the global pandemic. She claimed that “no one is dying” in Orange County and that the virus was “God’s way of thinning the herd.” But it’s Kelly’s latest comment that has received even more backlash.

“Your daughters are the best,” Kelly simply wrote on Shannon’s post. However, RHOC fans didn’t appreciate Kelly’s response. They immediately slammed the controversial personality for her vague response, saying she’s part of the problem, as per The Blast. Kelly has been spotted traveling with fiancé Rick Levanthal without her mask.

“@kellydodd you literally mock the virus and say hospitals lie and skew numbers, how many deaths are enough for you to take it seriously,” one follower wrote.

“@kellydodd maybe you practice social distancing. People like you is why the virus is getting worse,” another added.

It’s your fault Kelly, ppl like you downplaying the severity of this,” a third user wrote.

Fans have begged Bravo to fire Kelly for her “tone-deaf” comments, but she announced that she was filming with the cast for Season 15 earlier this month.

Check back with TV Shows Ace for the latest news on Shannon Beador.

Kanye West Wasn’t As Committed To Kim Kardashian As She Is To Him
Amy King Wishes To Save Abused Children After Cousin Josh Duggar’s Arrest
Natasha Parker Dishes On Worst Part Of Brendan’s Betrayal
Jill Dillard Continues To DEFY Dad Jim Bob Duggar In New Photo
‘RHONY’ Season 13 Reunion Canceled: What Does This Mean For The Show?