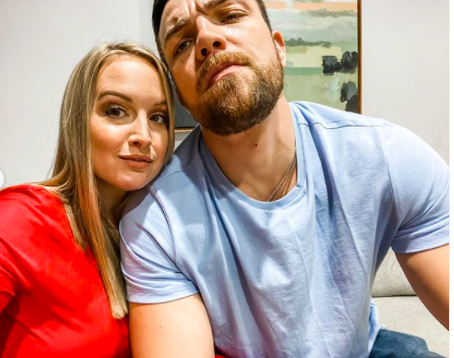 90 Day Fiancé: Happily Ever After? star Elizabeth Potthast’s family made a point of digging into her husband Andrei Castravet’s past. On the July 26 episode, Elizabeth’s father Chuck and her brother Charlie made their arrival to Andrei’s home country of Moldova.

The 90 Day Fiancé star’s dad and brother had a rocky start to their overseas adventure. Chuck and Charlie landed in Chisinau, but sadly their bags did not join them. Their luggage was missing! The pair both implied that they were not getting a good first impression of the country.

According to InTouch Weekly, after leaving the airport the plan was to head over to Andrei’s parents’ house to get to know his family. Charlie said, “We definitely want to learn more about him, his family, his past, his culture, how he grew up.” He went on to say it was “going to be nice to see how he acts in his own environment.”

It, of course, did not take long for tensions to rise between Chuck, Charlie, and Andrei. Before they even made it to Andrei’s parents’ house questions came up about Andrei’s previous job in Moldova. Andrei’s lack of employment seems to always be a giant sore spot for the 90 Day Fiancé stars no matter what country they’re in.

Andrei then told TLC’s cameras, “Sometimes, I feel like the language barrier is a positive thing because Elizabeth’s family’s stupid [remarks are] not going to touch the ears of my family.”

Did 90 Day Fiancé’s Andrei have a job?

A post shared by Elizabeth Potthast Castravet (@elizabethpotthast) on Jul 19, 2020 at 4:44pm PDT

However, Andrei was quick to the point. He revealed that he was a police officer and detective before he left for Ireland. This is of course where the couple first met. Elizabeth visited Dublin and ran into Andrei working there as a bouncer.

Learning this new information only made Chuck and Charlie even more suspicious of Andrei. They wanted to know why he would leave such a respectable and promising job only to go work as a bouncer?

Chuck went on to say maybe he was just being an overprotective dad, but he thought there were a lot of red flags with Andrei’s story.

But the mood later shifted at Andrei’s parents’ house. Chuck was shocked by the lovely meal his family had prepared for them and by how welcoming everyone was.

But of course, the family bliss can only last for so long. Later that evening, Charlie talked with Andrei’s brother, Radu, and asked if Andrei really served on the police force. But to the surprise of Elizabeth’s family, Radu said that Andrei was a cop for one year.

The two families continued to bicker as Chuck asked Andrei’s family members if it was normal in Moldova for the husband not to work? Andrei made his point once again that someone needed to be home with their baby while Elizabeth was at work.

What do you think of Chuck and Charlie’s suspicions? Are they just being protective or do they take their questions too far? Let us know what you think in the comments below. Be sure to watch new episodes of 90 Day Fiancé: Happily Ever After? on TLC on Sundays at 8 p.m. ET.