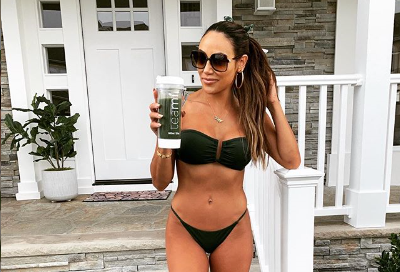 Melissa Gorga is offering some advice to a fellow housewife. Denise Richards has been storming out of parties on Real Housewives of Beverly Hills in the last couple episodes. There were good reasons for her to walk away. She got called out for alleged mom-shaming at Kyle’s BBQ. Another time she and her husband got into it with more than one of the ladies.

Now Melissa is offering Denise some advice about confrontation on the show. She said, “never run from a scene.” Denise fled a couple of times when the heat got turned up. She also used the word Bravo, having heard it was a code word to use when you didn’t want to be filmed anymore. The cameras kept rolling.

What Advice Did Melissa Gorga Have To Offer?

Like Denise, Melissa Gorga has been in some heated moments with her castmates. She said, “I always say stay there and get out whatever you want to say.” Gorga said when you run away you leave them to talk about it and the truth can get skewed according to US Weekly.

She said, “I personally never run from a scene. I sit there until I get my point across and explain it and state my facts.” Gorga said, “you got to just throw in the towel and be like, ‘All right, I’m not perfect’ and that’s why we’re on the show, to show we’re not here to act like a Mary Poppins.”

The RHONJ star said filming on the show when she was fighting with Teresa Giudice was difficult. One thing that makes that different is Giudice is her sister-in-law. Melissa said, “if she would ever bring up anything that was family drama, I never liked that.”

So I did it💁🏻‍♀️ Back to my Jersey Girl, Italian girl roots🇮🇹 Brunette power baby 🖤 Thanks to the best colorist in the 🌎 @hair_by_rachaelsackie @depasqualethespa

Melissa Has To Homeschool Her Kids In The Pandemic As Well

Melissa Gorga also opened up about having to teach her kids during the pandemic. She said, “I have never argued with my children more in my life than when I had to actually be their teacher. The funny part is before I was on Real Housewives of New Jersey, I got a B.A. in elementary education. I am a teacher and I was like, ‘This is crazy. This is so hard. I can’t do this.’” She is discovering what a lot of parents have: teaching kids is a hard job.

She said even though her kids don’t want to listen to her right now, she is the toughest parent. Melissa said, “I’m the one that’s like, ‘Move it. Brush your teeth. Let’s go.’ If Joe gets mad, it’s on… but I’m definitely the one that laid down the law. It’s fine. Good cop, bad cop. I’m always the bad cop.”

Fans have nine episodes left to see if Denise stops running from conflict.  The Real Housewives of Beverly Hills comes on Wednesday nights.