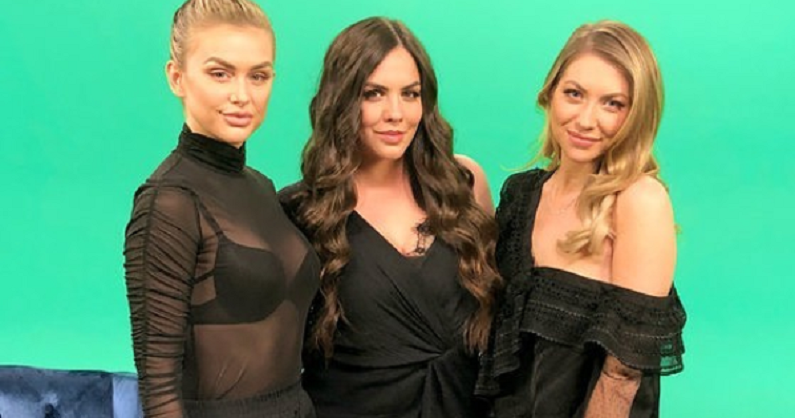 Stassi Schroeder just showed support for Lala Kent’s latest Instagram post. Just because she is no longer on Vanderpump Rules doesn’t mean she’s not close to her castmates. The former Bravo star has made a slow return to social media. However, it previously backfired on her and she’s laid low ever since.

But, Stassi did support her former VPR co-star Lala Kent on her sobriety. As TV Shows Ace reported, Lala opened up about her sobriety journey. On Friday, July 24, the model admitted her struggles in her emotional post. She’s close to celebrating her two-year sobriety anniversary in September. But she admits it was difficult to get there.

Lala Kent posted this breathtaking photo of herself wearing a leopard dress on her patio. In her latest post, she reflected on her sobriety. Stassi Schroeder showed her support with a sweet comment, as per The Blast.

“Love you. And very proud,” Stassi commented alongside a red heart emoji. The ladies had a hot-and-cold friendship on Vanderpump Rules. Lala and Stassi struggled to form a friendship at first when Lala first arrived in Los Angeles. While Stassi has kept quiet since her firing, she’s slowly made a comeback. And, she wanted to show that she’s still there for some of her former co-stars.

It’s been awhile since I’ve posted about sobriety. It’s important for me to say that this is a disease that can only be self diagnosed. No one got me sober… I got me sober. I made the choice to work hard every day to not pick up a drink. When I’m feeling weak, I call my sponsor. I go to meetings (sign onto them, now) to keep my spirits high and to remember why I made this life-changing choice. I see addiction in front of me often- but it isn’t my job to speak on it, nor is it my job to judge. It’s my job to pray for them and take a moment of silence for the alcoholic who still suffers. And when someone comes to me asking for help, I offer my ear & knowledge, and point them in the direction that was pointed to me. #1year9months2days

Instead of receiving backlash, Stassi received responses from fans begging her to return to the show. But, that’s not Stassi’s decision to make. It’s up to Bravo to decide whether Stassi should return. Just days after the firing announcement, Stassi confirmed that she’s pregnant with her first child with fiancé Beau Clark. In not one but two Instagram posts, the couple announced they’re having a girl.

The Vanderpump Rules star broke her silence on Stassi Schroeder and her shocking firing. Since she became close with Stassi, fans wanted to know her thoughts on the firing. Last month, Bravo fired Stassi and Kristen Doute for their past racist comments and actions. Lala broke her silence on those firings during a recent Instagram Live chat.

“To me, when people ask me how I feel about it … I try not to really get into it, but I will say that them not being on the show anymore … that hasn’t sunk in yet,” Lala said to her followers.

LALA KENT SPEAKS ON THE FIRING OF STASSI AND KRISTEN. #Pumprules #Vanderpumprules Sorry for the lagging.

“Because we’ve had such [a] crazy ride together and our [lives] consist of each other,” she continued. “You know when someone passes and you’re still fine because your body just goes into shock like you’re not used to it? That’s what it feels like.”

During her respective Instagram Live, Faith Stowers revealed the time that Stassi and Kristen called the cops on her for a crime she didn’t commit in 2018. They believed she was running from the cops and they had a true crime story on their hands. This revelation came amid the global Black Lives Matter protests.

What are your thoughts on Lala Kent and Stassi Schroeder’s friendship? Sound off below in the comments section.

‘LPBW’ Tori Roloff Melts As Jackson Takes Lilah On Four Wheeling Mission
‘General Hospital’ Spoilers, June 21-25: Maxie and Brook Lynn’s Barrel Of Lies
Khloe Kardashian & Tristan Thompson Split: Are They Over For Good?
‘Autopsy: The Last Hours of Frank Sinatra’ Where To See, What To Expect
OMG!!! Is Hazel Busby Of ‘OutDaughtered’ Possessed?!