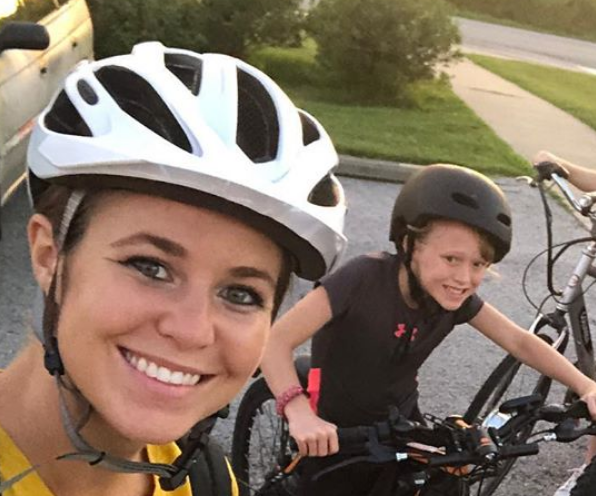 Jana Duggar recently shared a new post on Instagram. In the post, the Counting On star and several of her younger sisters are on a bike ride. While Jana’s post is pretty simple and harmless, that doesn’t mean it’s free of all criticism. Along with the picture, she jokes, writing, “You could say we’re on a roll….”

Jason Duggar is quick to stand up for his sister after a troll left a critical comment on her post. Jana’s follower writes, “I’m sorry I genuinely don’t understand why your younger brothers can move out of the family home but you can’t take a trip with friends unchaperoned 🤔”

You could say we’re on a roll…. 🚲😉 #summernights #bikeride

Earlier this year, Jim Bob Duggar accompanied Jana on a trip to Las Vegas. She was attending a gift and home decor event there. She went with a few friends, but her father tagged along. Because Jana is 30 years old, some fans are surprised to hear that Jim Bob went with her.

It’s also worth noting that the comment likely has something to do with the most recent Counting On episode. In the episode, it’s revealed that 21-year-old twins Jedidiah and Jeremiah Duggar have moved out of the family’s home and into their own bachelor pad. Though Jana is older than them, she still lives at the family’s home. Supposedly, she loves living there.

In the episode, the family addresses the kids’ choice to move out at 18. Many of the kids choose to live at home until they get married as a way to save money.

Jason wasn’t going to let the trolls get to his sister. So, he replied, “I’m sorry, I genuinely don’t understand how you think you know about all the trips she takes.”

While many fans agree with Jason’s comment and are applauding him for sticking up for his sister, a few think that Jana should be able to stand up for herself. After all, she’s 30 years old. Anyway, plenty of fans think that the love that the Duggar siblings have for each other is great.

Duggar kids don’t hold back when it comes to trolls

This isn’t the first time that the Counting On family has hit right back at the trolls in their comments section. Jessa Seewald often claps back when trolls make comments about her parenting. Of course, she isn’t the only one to do this.

Nonetheless, the Duggar family often gets nasty comments on social media. This is just part of them being in the public eye. Naturally, not everyone is going to agree with what they do.

So, what do you think of Jason’s response to the troll? Share your thoughts in the comments below.