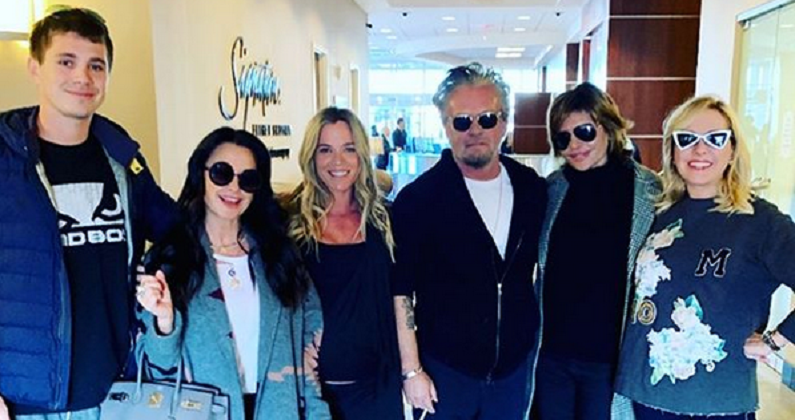 Teddi Mellencamp and her dad John Mellencamp had lots to talk about last night. The Real Housewives of Beverly Hills stirred up drama on Wednesday night. Brandi Glanville chatted with some of the cast members about Denise Richards. She had plenty to say. But she wasn’t the only one.

Brandi revealed Denise’s hatred for most of the cast. Then she finally got to the good stuff. She admitted that she allegedly slept with the Wild Things actress. The RHOBH ladies were in disbelief over the shocking revelations. But most of them believed Brandi, including Kyle Richards.

Teddi seems to believe Brandi as well. She had a lot to say after last night’s episode. Teddi and her famous father, John Mellencamp, threw some major shade at Denise. He also joked about his daughter’s pink hair.

RHOBH star Teddi Mellencamp had some words to say about Denise Richards. Her father, John Mellencamp, joined the conversation. The celebrities attacked Denise after she allegedly claimed that Teddi lived in John’s “shadow.” Teddi even said that Denise named dropped her ex-husband Charlie Sheen at any cost.

On Wednesday night’s episode, Teddi found out that Denise had been talking about her behind her back. Former Housewife Brandi Glanville alleged that Denise told her that Teddi would “do anything to be in this group” because she wants to get out of the “shadow” of her famous father John Mellencamp. Both Teddi and John didn’t take that well. As per HollywoodLife.com, the 39-year-old posted a conversation between her and her father.

At the top of the text message, it read, “Dads new cell” and he wrote to Teddi Mellencamp, “I know you are busy living in my shadow but…” Then he shared a photo of himself with Teddi and threw shade at Denise by adding, “Dennis Richards. Never heard of him.”

“You know who DENISE is dad,” Teddi responded. She then mentioned that Denise name drops her ex-husband Charlie Sheen’s name. “She is the girl who mentions Charlie Sheen every episode,” she wrote before adding, “Love you, call you tomorrow.”

In the caption, Teddi wrote, “Got my sense of humor from my dad’s shadow. #RHOBH.”

Teddi Mellencamp shocked fans during her new at-home confessional. She previously revealed that she dyed her hair pink, which she debuted on RHOBH. Back in May, she revealed that she wanted to “do something drastic with my hair.” However, some fans were mixed on Teddi’s new look, as per Us Weekly.

John’s not a fan over Teddi’s new look either. Over on her Instagram Stories, Teddi Mellencamp shared another screenshot of her text messages between her and her father. “Do you have pink hair,” he asked, to which she responded, “yes.”

“That’s a Halloween costume,” he responded. Then Teddi shared Richard’s photo, adding, “this is it without the extensions.”

“And you’re the one that told me don’t dance on the stage dad,” he responded. “It’s embarrassing.” Teddi supported his statement, by adding, “Best advice I have given.”

On May 18, the mother of three debuted her new look on Instagram. She revealed that she used Overtone Color conditioner to get her pink hair just right.

What are your thoughts on Teddi Mellencamp and John Mellencamp’s exchange? Sound off below in the comments section.