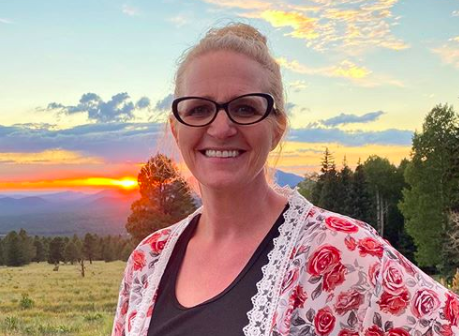 Sister Wives star Christine Brown shared some photos of herself and her three daughters to Instagram. Almost immediately her sister-wife Janelle commented a few words of support on the portraits!

But it really seems that the two sister-wives share a special bond these days!

Christine’s Instagram post showed off her three daughters, Truely, Gwendlyn and Ysabel, in front of an amazing sunset on Tuesday, July 21. She captioned the photos, “We’re chillin’ at the #flagstaffsnowbowl tonight. Really chillin! It’s cold!!”

According to InTouch Weekly, another Sister Wives star Janelle Brown commented right away in support of  Christine’s adorable new photos with her daughters.

Janelle wrote, “This is really completely great in every way” along with a heart-eyes emoji.

It seems this post just might be letting fans know that the family is still at the original property in Flagstaff after her move from Las Vegas. This caption really stood out to observant fans as there have been recent rumors that the Sister Wives family may have moved to the Coyote Pass area in Arizona.

Where do the Sister Wives stars live?

In the comments, a fan blatantly asked Christine for a “house update.” But she did not respond. Other fans seem to guess her lack of response was to keep from spoiling any surprises that may be revealed in a new season of the show.

Since the show began the family has hopped around between cities and houses several times. They have moved from Utah to Las Vegas to Flagstaff, and now perhaps Coyote Pass.

According to Realtor.com, Kody Brown has bought a large amount of land in Coyote Pass and intends to build new houses there for each of the sister wives. In January he even tweeted, “I do miss the Vegas houses and cul-de-sac. I’m looking forward to building homes and gathering family at Coyote Pass.”

No one seems to be entirely sure about the status of the family’s homes in Coyote Pass. But, according to InTouch, Meri Brown started rumors construction had not started yet when she shared a photo of some empty land back May.

What do you think of Janelle’s sign of support for Christine? Will the family ever move from Flagstaff to Coyote Pass? Let us know what you think in the comments below. Be sure to keep an eye out for new episodes of Sister Wives in 2021. Fans remain hopeful the show will make a return for Season 15 on TLC!