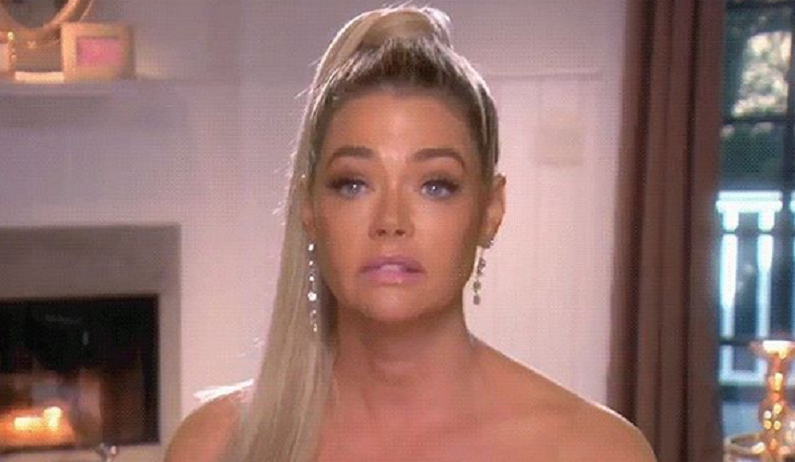 Denise Richards is fighting back mad. The Real Housewives of Beverly Hills fired back at her co-star Teddi Mellencamp. She did not hold back when she slammed Teddi Mellencamp’s joke following Wednesday night’s episode of RHOBH.

Fans are in full support of Denise’s clap back. TV Shows Ace reported that Teddi Mellencamp and her father John Mellencamp threw shade at Denise on social media. Teddi shared a text message exchange between herself and her famous father.

On Wednesday night’s episode, Brandi Glanville told Teddi and Kyle Richards about her alleged affair with Denise. She also said that Denise “doesn’t like anyone,” including Teddi.

Following the episode, Real Housewives of Beverly Hills star Teddi Mellencamp took to Twitter. She threw shade at Denise Richards by sharing her text message conversation with her father. In the messages, John said he doesn’t know who Denise is. Referring to what Brandi alleged Denise said about Teddi in the episode, John wrote, “I know you are busy living in my shadow but…”

He sent her a photo of the two of them with the caption, “Dennis Richards – never heard of him.” Teddi responded to her father by taking a swipe at Denise. “You know who DENISE is dad. She is the girl who mentions Charlie Sheen every episode.”

What possessed Teddi to act this way is what Brandi alleged about Denise. Brandi said that Denise told her that Teddi would “do anything to be in this group” of women because she was desperate to escape her father’s “shadow.” However, that didn’t go well with the father and daughter duo. This caused the 39-year-old to share the text message conversation between them.

In Teddi’s screenshot, John botched Denise’s name on purpose. Teddi also claimed that Denise name-dropped Charlie Sheen at any chance she gets. The accountability post captioned her post, “Got my sense of humor from my dad’s shadow. #RHOBH.”

RHOBH fans loved Teddi’s post. As per HollywoodLife.com, some of them claimed that Denise was “jealous” of her co-stars, including Teddi. Other fans asked for a spinoff series starring Teddi and her father.

Denise Richards didn’t like Teddi’s joke. On Thursday, July 23, the RHOBH star took to Instagram to slam Teddi’s comment, as per The Blast. Reposting Teddi’s post, she wrote, “Grown a** woman stooping to that level… sorry…” She also denied telling Brandi about Teddi living in her father’s shadow.

In that same post, Denise also accused Teddi of sharing “a salacious and untrue rumor about my marriage.” She thought that her co-star would’ve understood.

Grown ass woman stooping to that level… sorry…🤣 I never said you live in your dad’s shadow. Ever. I don’t care what you were told. … I was hurt you felt the need to share a salacious untrue rumor about my marriage, especially given you are the daughter of a famous father & know what the potential impact could’ve been with my kids & family. That is all I have ever said about your family. 💕Aka(Dennis)

During Wednesday night’s episode, former co-star Brandi warned the ladies about Denise. She accused her friend of “backstabbing” everyone. She also warned people about Denise’s demeanor. “I don’t want to go totally into it, but what you see isn’t what you get,” Brandi explained.

While Teddi and John had a good laugh, Denise clearly isn’t laughing. So, this should be an interesting season.