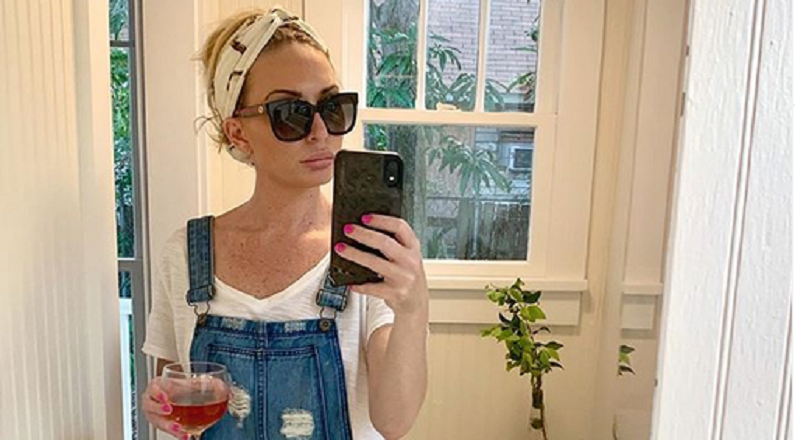 Below Deck star, Kate Chastain proved that the show is “one of the most difficult shows” to film. She revealed all in a behind-the-scenes video. In addition to taking care of the charter guests, the Below Deck crew also has to make sure production sleeps at night. Sometimes that’s not easy when there’s a lot happening on board.

Former chief stew Kate Chastain shared a video that revealed how long it takes her to turn off the lights in her bunk every night. She has to wave at the infrared beam to trigger the light above her desk to extinguish it. It’s a difficult process since the sensor doesn’t always respond.

Kate Chastain reveals Below Deck is a tough show to film

The Below Deck alum shared an interesting video on Twitter. Longtime chief stew Kate Chastain shared some behind-the-scenes secrets of filming the show. On a yacht where the cameras capture your every move, it’s not always easy.

“Going through my phone, found this fun video,” Kate Chastain tweeted on Wednesday, July 22. “I feel like everyone should know #BelowDeck is one of the most difficult shows out there for cast members. Every night, after working 16+ HOURS, we’d get into our tiny bunk, [and] have to wave to the camera so they’d turn our lights off.”

Going through my phone,found this fun video….I feel like everyone should know #BelowDeck is one of the most difficult shows out there for cast members.Every night, after working 16+ hours, we’d get into our tiny bunk, & have to wave to the camera so they’d turn our lights off. pic.twitter.com/E826sdiuYF

But it’s not that easy. Sometimes it doesn’t always work because the sensor doesn’t pick up on it. The video that Kate posted shows her in her bunk while filming an episode of Below Deck.

She waved at the camera mounted on the ceiling until the lights in her cabin shut off. This secret was also revealed in an article from The New York Times published on June 29 that gave readers an idea of what it took to film Season 5 of Below Deck Mediterranean.

Kate Chastain and other cast members have revealed that Below Deck is filmed around the clock. Producers arrange cameras in certain areas where producers can still capture footage when the camera operators aren’t working. Being on the show means that you could get filmed while sleeping or in suggestive situations.

Also, on Wednesday, a fan asked Captain Lee Rosbach if they can turn off the cameras, especially when the crew falls asleep. He responded with a resounding, “Nope.” But even Captain Lee forgets cameras are constantly on.

As TV Shows Ace previously reported, Below Deck Mediterranean third stew Jessica More says there’s no privacy on the yacht. The only privacy that crew members get is in the bathroom. Since there are cameras all over the boat, it can be hard to escape for a moment of peace.

Kate’s mom “was mortified” after this TV moment

The Below Deck alum recently got cheeky on WWHL. The hilarious moment ended up shocking her own mom. As per Bravo’s The Daily Dish, Kate Chastain pulled a hilarious stunt during the July 20th episode of Watch What Happens Live with Andy Cohen: @Home. Kate appeared during the episode’s “Moment of Mazel.” She revealed how viewers can have fun while quarantining at home.

“What’s a party without some food? I like to get mine delivered,” Kate says as her doorbell rings. “Actually, it just arrived. And you always want to look cute for your delivery person. I’m on my way!”

Link in bio for more hot tips. Repost from @bravowwhl • Don’t be tardy for the quarantine party! 🥳 #MomentOfMAZEL

Kate got up and walked toward the door. However, in this “Moment of Mazel,” she wasn’t wearing any pants. The Real Housewives of Dallas star D’Andra Simmons supported Kate’s funny moment. Kate responded to D’Andra’s tweet, “Aww thank you! My poor mom was mortified!”

Awww thank you! My poor mom was mortified 😂