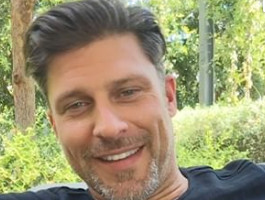 The mass exodus at Days of Our Lives continues. Greg Vaughan, who plays Eric Brady, is leaving the soap. This comes on the heels of long-time cast member Kristian Alfonso’s announcement that she’s leaving the show after 37 years. Several other DOOL actors are on the chopping block as well.

Greg Vaughan has been on Days of Our Lives for eight years. Before that, he played a recast Lucky on General Hospital. He is still close with his GH co-stars. Greg as a recent guest on the That’s Awesome! With Steve & Bradford podcast. Steve as in Steve Burton, who plays Jason on GH. Bradford Anderson plays hacker Damien Spinelli on the ABC soap.

On the podcast, Greg told the hosts that he will be leaving his role on DOOL later this year. However, he stops short of saying it’s a permanent exit. Rather, he says, “it’s never over.” But he is “taking a break” from the NBC sudser, People reports.

He explains to the fans and listeners that the decision came after DOOL let the entire cast go during contract negotiations. The show was ultimately renewed for another season, but the soap is clearly whittling the cast down.

Greg says that he felt his role “was coming to an end anyways.” Eric just married Nicole (Arianne Zucker) on the show. And they do say a happy couple is a boring couple. On soaps, anyway.

In real-life, the DOOL actor is engaged to Law & Order actress Angie Harmon.

What’s Going on at DOOL??

Days after announcing her departure, Kristian Alfonso told fans the reason behind her decision. She says that the show was thinking of sending her character, Hope, out of town for up to six months. While she cites that as the reason for her decision to leave, she admits she’d been thinking of leaving for a while.

Unlike Greg, Kristian’s exit is final. TV Line reports that she doesn’t “plan on returning and popping in like others.”

When DOOL released everyone from their contracts, they said they would eventually resign those willing to return. It seems as though they miscalculated how many stars would be willing to  return.

Twitter user Alan Sarapa has an inside line to the comings and goings of DOOL. The podcast host tweeted that there will be nine exits total in the coming months. By comparison, DOOL’s previous firings were “5/6 people at once.”

According to his sources, those leaving so far are “KA, VK, GG, FS, CM, CB, GV.” There are also two yet-to-be-names exiting. Many fans speculate those last two names are Melissa Reeves and Matthew Ashford (Jennifer and Jack.) TV Line accidentally posted a pre-written story last week that she was fired. They later retracted it. But perhaps the story was true, but they weren’t authorized to announce yet.

There's two more shoes to drop that I know of. So we're looking at 9 exits so far: KA, VK, GG, FS, CM, CB, GV, [redacted] and [redacted]. I think this is definitely the biggest #Days exodus ever and that's saying something when in the past they've fired 5/6 people at once. pic.twitter.com/z2X4IpWwOp

The other initials are:

Of those, Victoria Konefal, Camila Banus and Galen Gerig’s exits are still just rumors. However, Freddie Smith and Chandler Massey confirmed their exits on social media.

Tell us in the comments if you’re surprised by all the exits on DOOL. Who will be next to leave?