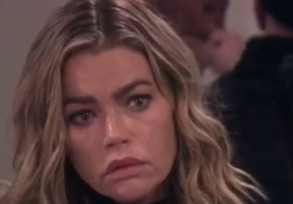 The Real Housewives of Beverly Hills fans have read rumors for months about a Denise Richards and Brandi Glanville hook up. Viewers were warned early on that the accusations wouldn’t be addressed until the latter half of the season.

First fans had to watch a long, drawn-out circular argument between Denise and her RHOBH co-stars over mom-shaming. Unfortunately, the leaks from the Season 10 reunion imply that they continue to beat a dead horse on the subject.

But on the Wednesday, July 22nd episode, fans got a reprieve from that particular snooze of a storyline. Instead, Brandi Glanville and Kim Richards crashed Kyle Richards and Teddi Mellencamp’s baby shower planning sesh.

And Brandi brought the goods.

According to Brandi, Denise had some things to say about her RHOBH co-stars. None of it good. Denise allegedly told Brandi that she didn’t like any of her co-stars, including long-time friend Lisa Rinna.

These revelations came after Brandi tried to warn them that Denise isn’t what she seems.

But that’s not all Brandi revealed. She finally, in full detail, laid out her affair allegations against Denise.

The watershed moment came after Kim insists that Denise did something horrible to Brandi. The former model initially didn’t want to tell the other women what happened. However, she eventually revealed that the two hooked up. More than once.

Brandi alleges that the first time happened after their very first meeting for dinner and drinks. Their conversation over drinks was filmed for Season 9 of RHOBH. They mostly discussed Lisa Vanderpump and the allegations that she sold a story to an online outlet.

Allegedly, the two got “completely wasted” and made out in the bathroom. At the time, Brandi notes that Denise wasn’t “with” Aaron, Us Weekly reports. However, she also said that Denise and Aaron have an “understanding” that allows Denise intimacy with women. Brandi tells Kyle and a shocked Teddi that she herself is bisexual, something even her kids know.

Months after their initial hookup, Brandi alleges that Denise invited her to visit her on set while she was working. Brandi told Kyle and Teddi that she was led to believe a “rollaway” bed would be available for her. Additionally, she alleges that Denise’s “middle daughter,” Lola, was there at the time, too.

However, when Brandi got there, that was no rollaway bed. Rather, she slept in the same bed as Denise. It’s there, Brandi alleges, that the two were completely intimate. “Like kissing?” Teddi asked.

The Heart of The Issue Between Brandi and Denise

The next thing Brandi says is the crux of the issue. The RHOBH alum reveals that Denise asked her not to tell Aaron about the hookup or “he’d kill [Denise.]” Brandi was under the impression throughout the entanglement that Aaron knew and gave permission.

Brandi recounts to Kyle and Teddi how she would NEVER be involved with a married person after what she went through. As fans know, Eddie Cibrian famously cheated on Brandi with LeAnn Rimes. He also had an affair with Vanderpump Rules star Scheana Shay.

As a result of that experience, Brandi insists she never would have been with Denise if she’d known that Aaron didn’t approve.

The ladies, sans Brandi, are heading to Rome, Italy, for a girls’ trip hours after Brandi’s bombshell accusation. The preview for next week shows Teddi telling Lisa Rinna about the allegations and later confronting Denise about it.

#RHOBH sneak peak: next week @deniserichards is confronted by the women in Rome! 💎

Brandi’s shocking revelation came in the last 10 minutes of the episode. Fans were immediately divided into those who believe Brandi and those who don’t. Kyle said in her own confessional that the Brandi she knows isn’t a liar. Several fans on Twitter point out that Kyle certainly didn’t feel that way when Brandi accused Kim of doing drugs in the bathroom.

One fan account questions Brandi’s story. Brandi saw the tweet and replied that she has “proof.” She didn’t elaborate.

Ummm I have proof as you will see

Other fans thought it mighty convenient that Brandi just happened to be waiting out in Kim’s car that night. The two were going out to dinner to celebrate Brandi’s birthday. Kim, on behalf of Kyle, invited Brandi into the house.

Love how Brandi just “magically” had a microphone on when she was asked if she wanted to come inside from the car.#RHOBH pic.twitter.com/PWG7WSWe70

Tell us in the comments – do you believe Brandi’s story about her alleged affair with Denise?

The allegations will likely dominate the rest of Season 10. Brandi did not appear at the reunion. Instead, she will sit down with Andy Cohen for a separate interview.