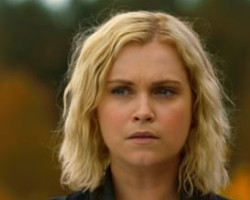 Fans of the CW show The 100 are both looking forward to new episodes while simultaneously counting them down. After all, this is the seventh and final season of the cult hit. And no one is more surprised than I am at the show’s addictiveness.

I’m someone who mainly watches trashy reality shows and even trashier daytime soaps. As a result, I’m the last person who should be a fan of the sci-fi drama.

In fact, the only reason I began watching The 100 back in Season 1 is for actress Paige Turco. Some may remember her from The Teenage Mutant Ninja Turtles. I’ve been a fan of her since her All My Children and Guiding Light days. Throw in Henry Ian Cusick from LOST and I was in. (Side note: I only watched LOST because of Matthew Fox, AKA Charlie from the original Party of Five.)

While I may have begun watching for Paige Turco, I kept watching because the unexpected happens on The 100.

If you’re not watching The 100, you’re missing out. I have watched every episode of all seven seasons so far and I still have no idea what’s happening. And that’s not a bad thing. In this case, the show is so enthralling that even the most outlandish storylines reel viewers in.

Are they on Earth or are they on some made-up planet? I don’t even know half the time. But by the time the episode is over, I’m ready for more.

Unfortunately for fans, the show is on a hiatus until next month. That’s right. Last week’s episode was the last one for a while.

Whether due to coronavirus or simply drawing out a final season, The 100 won’t be back until August 5.

Earlier this season, the showrunners chose to focus one episode solely on Anaconda. If it’s picked up by the CW, the spin-off will show the origin story of how Clarke and company ended up The Ark, far above Earth.

The main character, Callie (Iola Evans) is the first Grounder. The Grounders are, of course, the only humans left on Earth after the apocalypse. The show would explore the time before Season 1 of The 100.

The Final Season of The 100

After seven seasons, The 100 will end later this year. With just seven episodes left, there is still a lot of story left to wrap up. Hence my initial annoyance at ‘wasting’ an episode on the prequel. (It was actually pretty darn good.)

The show still has to answer if Bellamy (Bob Morley) is really dead or not.

Clarke (Eliza Taylor) has to find a way to get herself and her friends from planet Bardo back to Sanctum. The show has never shied away from killing off main characters, so I’m fully expecting at least one or more big deaths.

If you haven’t checked out The 100 yet, there’s still time. Netflix has the full episodes of Season 1-5 and half of Season 6.