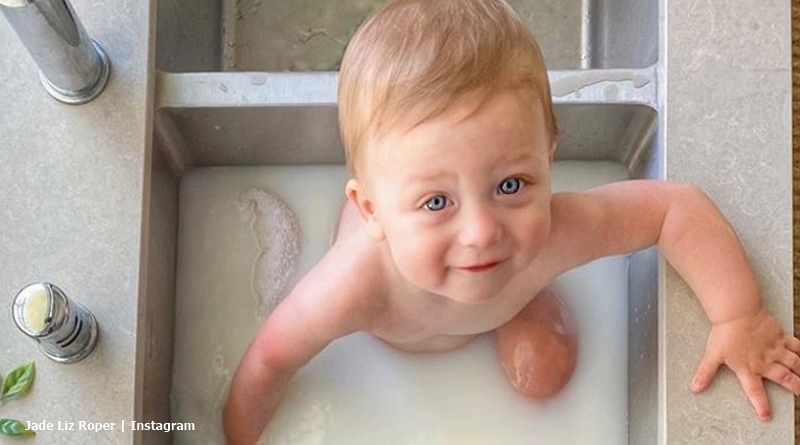 Jade Roper and Tanner Tolbert fans can probably expect loads of cuteness and new antics from their son Brooks. The little lad just took his first steps alone. His proud parents videoed the massive milestone on Tuesday, July 21. Brooks looked so proud of himself as his mom called encouragement.

We reported last week that Tanner and Jade’s son Brooks now bonds with his big sister Emmy. Originally, the little girl seemed rather disinterested in Brooks. And, many other parents told Jade their own kids only really bonded once the baby started showing some personality. Well, now, it looks like those two kids began a whole new world of adventure together. Brooks started walking! Jade Roper shared the happy news on Instagram and caught it on video.

Just one week shy of his first birthday, Brooks stood by his dad for a bit, then walked across the room to his mom. The cute video reveals Jade calling encouragement to her “pixie.” Behind his comforter, Brooks holds a huge smile. What a nice day for the Bachelor in Paradise alums, fans think. From now on, things probably get a bit hectic in the Tolbert’s home. As Jade pointed out, “He’s gonna be keeping us REALLY busy now! 🤣🤣😍😍.”

In her caption, Jade also said, “FIRST STEPS!! Someone’s a big boy!!” If you followed the story of Brooks’ birth, perhaps you understand a bit better how wonderful this moment must feel for Jade. On July 29, 2019, Brooks arrived in a rush. UPI reminds fans that the BiP couple released the first photos of Brooks just a few days after his birth. Then, the big story came about how he arrived so fast Jade couldn’t make it to the hospital. So, little Brooks got born in the closet.

Later, Jade Roper freaked out when she discovered her son weighed in too low. She experienced feeding issues as Brooks was born with a lip tie. Eventually, she and Tanner went ahead and the little guy got it fixed with a minor surgical procedure known as a frenectomy. Since then, he really started taking off. Back to his proper weight, Brooks hits all his milestones right on time. For a while, Jade said she felt racked with guilt because her son suffered malnourishment. So, no doubt Brooks made their day on Tuesday.

On her Instagram post, people celebrated the joyful moment along with Jade and Tanner. One fan wrote, “So cute!!! Did Emi walk the soon as well? I have this theory that younger siblings walk earlier so they can keep up with the older sibling😍.” Another  one chipped in with, “Wow, growing up so fast.. cute as [a] button though, seems like yesterday you had him.”

Naturally, moms with new toddlers also spoke about the “wild” times ahead for Jade Roper and Tanner Tolbert. Soon, he’ll probably be “into everything!”

What do you think about Brooks Tolbert walking just one week shy of his first birthday? Sound off in the comments below.