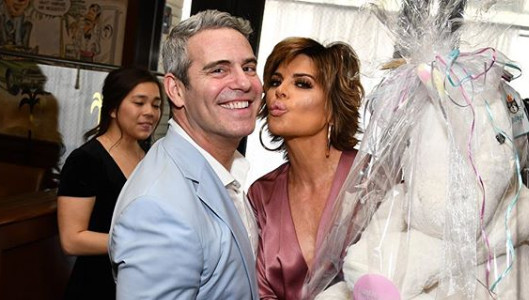 Lisa Rinna is not a happy Housewife. The Real Housewives of Beverly Hills star has been venting on social media for almost a week straight. The former soap starlet is seemingly upset that she couldn’t hash out her issues during the RHOBH reunion.

Hours after the reunion taping, Lisa took to Instagram to slam the Season 10 reunion as “bullsh*t.” She also alluded to a “cease and desist” preventing real conversation.

Fans think she’s talking about Denise Richards. In the RHOBH mid-season trailer, Lisa confronts Denise about the rumor that she sent Brandi Glanville a cease and desist letter. That episode will play out later this season.

The RHOBH reunion is a bit different this season. Due to the coronavirus, it was done virtually on Zoom. Up until the day of the reunion taping, July 16, fans thought Brandi would attend the virtual reunion. However, Brandi revealed on Twitter that day that the producers opted not to include her. She will get her own one-on-one interview with Andy.

But fans wanted to see a Brandi and Denise confrontation. Apparently, Lisa Rinna also wanted Brandi there. On his Radio Andy radio show, Andy confirms that Lisa was “really upset” with Brandi missing the reunion.

Andy also corroborates Brandi’s assertion that it was a last minute decision, Us Weekly reports. He says that the producers were “going back and forth” about having Brandi on the reunion. Ultimately, they chose to interview her separately.

The Watch What Happens Live host assures fans they will “understand” why once the reunion airs later this summer.

RHOBH’s Teddi Mellencamp already let it slip that the reunion taping took 13 hours. Andy says on his radio show that he was a bit “annoyed” that the filming didn’t begin until “2 something on the East Coast.” While the RHOBH ladies are on the West Coast, Andy is in New York.

As a result, the filming didn’t end until after 11 p.m. his time. He jokes on the radio show that he immediately went home and drank “straight tequila.”

In addition to her cryptic posts about a “bullsh*t” reunion, Lisa also wrote that a friend of 20 years turned out to be a “phony.” Many fans took that as a swipe against Denise, whom Lisa has known for 20 years.

Lisa’s main issue with Denise seems to be that Denise avoids confrontation. Instead of hashing things out to Lisa’s satisfaction, Denise just leaves.

On July 21, Lisa seemed to take another dig at Denise. She posted on Instagram that the ladies of RHOBH “sign up to show our lives.” She seemingly chides Denise by writing, “We’ve never run from the truth.”

Tune in to The Real Housewives of Beverly Hills Wednesdays on Bravo to watch it all go down.