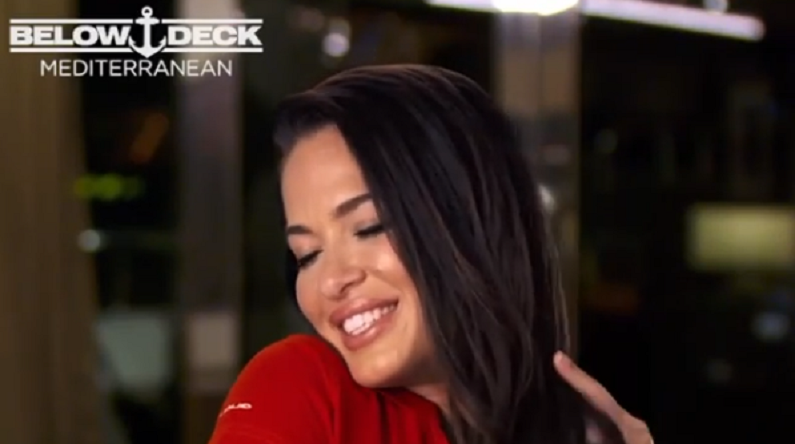 Below Deck Med stars Jessica More and Rob Westergaard appear very close on the series. The couple sneaks a kiss every chance they get. But their “boat-mance” didn’t last forever. Jessica revealed in a new interview that she’s not on speaking terms with Rob. She didn’t have much to say about the deckhand.

That means the beautiful third stew is single. Jessica opened up about their relationship. She was very attracted to his “mysterious and quiet” ways even though he was dating someone else. However, that didn’t stop her from pursuing a relationship with Rob.

Jessica More reveals the truth behind her relationship with Rob Westergaard

Below Deck Med star Jessica More shared the details of her relationship with Rob Westergaard in a new interview with In Touch. The reality star explained why she was so attracted to him even though he was in a relationship at the time.

“I think initially I was attracted to Rob because he was just like mysterious and quiet,” Jessica explained. “You could just tell there was a lot of going on in his head, you know, I wanted to figure that out.”

The couple started out on a positive note on the show. Even the viewers noticed that they can’t keep their hands off each other. Jessica and Rob kiss each other, even during charters. But during her interview, Jessica teased that there is drama to come.

Last night from “inside a fish tank” 😆 on @bravowwhl w/ @bravoandy . @bugsydrake & I discussed last nights episode of #BelowDeckMed , if I’m single and Where in the world is Jessica 🤷🏻‍♀️ (cause I never really know) 😏 🍵 |MAU 💄 @therealdanieldiamonds

“I mean, I think with any or most boat relationships, you know, it gets a little interesting,” the model says. “I think there’ll be a few little, you know, some hiccups.”

Nowadays, Jessica is against crew relationships simply “for the reason of not wanting to s*** where I sleep, essentially.” But Rob was her first “boat-mance.” She blamed him for the hookup. “I guess he couldn’t resist,” Jessica added.

She supports Below Deck Med star for questioning Rob’s relationship

Chief Stew Hannah Ferrier felt a responsibility to question Rob’s open relationship. She was concerned about Jessica since she’s seen “boat-mances” fall apart in the past. Jessica is glad that Hannah was looking out for her best interest at heart. She didn’t dare to question Rob’s relationship at first.

“I think at the time it was really uncomfortable, but I’m glad that she did it,” the Bravo personality said. “I don’t know if I necessarily would have had, at the time, the guts to do it myself, I was still pretty timid in the situation. So, I’m glad she did it.”

Jessica admits she wanted to know “what the truth was,” even as she was “building feelings for somebody.” Although things with Rob and Jessica heated up on board, the couple doesn’t talk these days. She also doesn’t hold out any hope for a rekindled romance.

“We don’t really communicate,” Jessica admitted. “He has a really good heart, you know, down in there somewhere. I wish him the best of luck, but I don’t think we’ll really be communicating in the future.”

Jessica also plans to swear off any future “boat-mances.” It appears that the feeling is mutual. In a recent interview with Reality Check, Rob called it “a gray area” when he was asked if he’s on good terms with Jessica.

‘Life After Lockup’: Is Sarah Still In Love With Michael?
Rilah Ferrer’s Mom Rosa Shares A Peek Into Drama With Anthony Vanelli
‘My 600-lb Life’ An Update On What Happened To Brittani Fulfer
About The Brook Baker Case From ‘One Deadly Mistake’ With Spoilers
‘Little People Big World’ Alum Has Fun On The Slopes