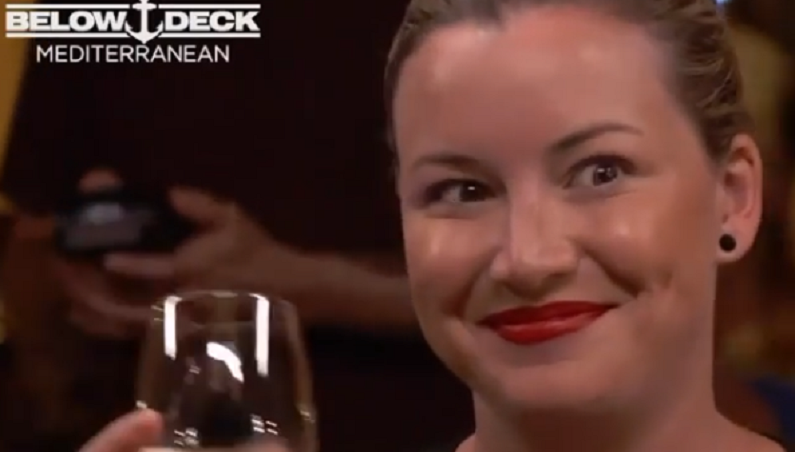 Below Deck Med fans accused Hannah Ferrier of taking drugs. It all started when they noticed the chief stew taking a pill every night before bed. Then came her “Valium” comment that raised eyebrows. Hannah Ferrier confirmed on Twitter that she took Advil in her cabin every night. Fans wanted to know why she was taking so much medication.

Fans began to question Hannah after her exchange with third stew Jessica More. The two took a break in the crew mess. Hannah complimented on Jessica’s boho robe. “I like your dressing gown,” Hannah said on Monday night’s episode. Jessica said it made her feel like she’s not working on a boat.

“So does Valium,” Hannah joked. Below Deck Med fans assumed she was on Valium to help with her anxiety. Later on in the episode, Captain Sandy Yawn pulled Hannah aside and said she doesn’t seem like herself, causing more speculation. Here’s what Hannah had to say.

Several fans noticed that Hannah Ferrier took medication on more than one occasion during the charter. She took a pill every night before bed. After Hannah’s “Valium” comment, Below Deck Med fans accused her of popping the prescription medication. Even in the season’s trailer, Captain Sandy Yawn confronts someone on board who has drugs in their luggage.

“Hannah can’t possibly be the only person who takes medicine on this boat, right? Why do they only show her taking her meds?” one person tweeted.

🛥CaptainSandy Every Season,
…”You don’t seem yourself, Hannah.”🛥

Hannah confirmed on Twitter that she took Advil for her swollen feet. People accused Bravo of including the scenes to make Hannah look bad.

One fan slammed the deliberate edit. “Why do they show Hannah taking medication every night before bed? It actually p****s me off and I feel like they are trying to create some kind of story or implication,” the fan tweeted.

Another fan added, “I don’t understand why they keep showing Hannah taking her meds, like who cares?! It’s self-care y’all!!”

Below Deck Med viewers noticed tensions increasing during the charter. The guests kept them going up and down the stairs. Taking over-the-counter pain medication is common, especially in a high-stress and fast-paced work environment. Even Captain Sandy Yawn made matters worse with her constant micromanaging. Tensions continue to run high among the crew.

“I just want to check in with you,” Captain Sandy asked, as per Decider. “How’s it going, are you good?”

“Since when?” Hannah asked with a smile.

Hannah insisted that she was fine. But during her confessional, she admitted that she felt exhausted.

Hahahaha. It’s the end of a longgggg day 😂😂 I was popping anti inflammatories daily because my feet were so swollen 😫😫 It’s a young persons game!

“I’m f***ing tired!” she exclaimed, but she didn’t want to argue. “You know what, I know what Sandy’s like when she’s going on a rant like this and there’s nothing you can do or say or do so the best thing is just to keep your must shut.”

Even some Below Deck Med fans agreed that the chief stew looked over her job. One fan put it bluntly. “Hannah reminds me of the end of my days serving.. I was f***ing over it… work your ass off for years and years serving assholes. You start to just give no f***s about people’s feelings.”

What are your thoughts? Do you agree that Hannah Ferrier received a bad edit? Sound off below in the comments section.