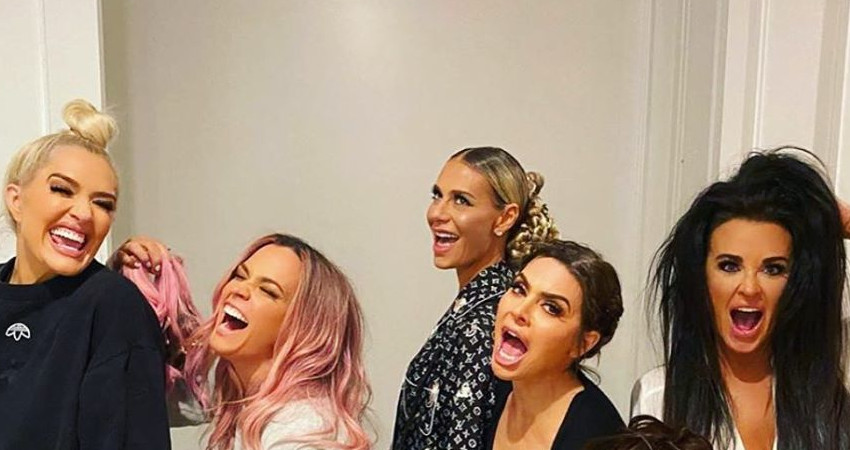 The Real Housewives of Beverly Hills star Lisa Rinna isn’t here for phony friends. Days after posting that the RHOBH reunion was “bullsh*t,” Lisa is taking aim at her unnamed co-star again. The actress took to her Instagram stories to vent about phonies. She advises fans on what to do when “a friend of ‘20 years” is found out to be a phony.

Over the weekend, Lisa took to her Instagram Stories to once again to vent her frustrations. Many took her earlier comments about a “cease and desist” order stifling the reunion to be about RHOBH co-star Denise Richards. In the season 10 mid-season trailer, Lisa brings up a “cease and desist” that Denise allegedly sent to Brandi Glanville. Fans will see that discussion play out later this season.

In her more recent posts, Lisa rails against “phony” friends. On a green background, she wrote a little advice for her followers. “You have to be true to yourself and if you find out your friend of 20 years is a phony?,” Lisa rhetorically asked. She gave one word of advice: “Run.”

In the next Instagram Stories slide, she posted a photo of her in mid-run down a street. As fans know, that’s a reference to an earlier episode of Season 10 of RHOBH. In the episode, Denise Richards and her husband, Aaron Phypers, walk out of a group gathering after an argument breaks out. Lisa runs barefoot in a dress after the couple.

Adding up the “cease and desist” jab and the running photo, fans assume she’s talking about Denise Richards. The two actresses have also been friends for “20 years,” as they mentioned several times on the Bravo show.

RHOBH Star Also Posts Definition of ‘Phony,’ and Other Words

Not only does Lisa have advice, she tells followers how to identify someone “phony.” In addition to the slides mentioned above, Lisa shared screenshots with word definitions. One word she defined for her followers is “phony.”

The Days ofOur Lives alum also defined a “narcissist filter” for her followers. The filter is when a narcissist accuses others of what they themselves are doing. Us Weekly reports that Lisa also wrote that she likes to “get into good trouble. Necessary trouble.”

Lisa and her daughter, Amelia, are featured in this week’s upcoming episode. Amelia recently took to Instagram to slam a troll for accusing her of lying about her anorexia. In her own defense, Amelia revealed that Lisa ‘forces’ her to appear on RHOBH.

The Real Housewives of Beverly Hills airs Wednesdays on Bravo. Check out the preview clip of the next episode below: