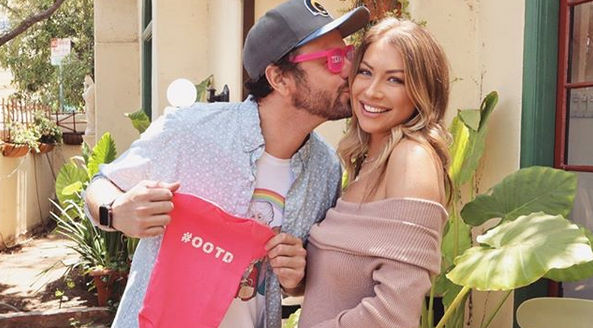 Stassi Schroeder revealed the three things that her unborn baby already enjoys. The Vanderpump Rules alum made another brief appearance on her Instagram Stories. As TV Shows Ace previously reported, the reality star made her big return to social media, which backfired on her.

She wanted to confirm to fans that she’s friends with Kristen Doute again. Stassi commented on Kristen’s latest Instagram post and both of them received backlash.

Fans are not happy with Stassi and Kristen’s past racist actions agains their former VPR co-star Faith Stowers. They want the Bravo personalities to grow up and change. Stassi bowed out of Kristen’s post, but made a pregnancy update.

The Next Level Basic author gave her followers a glimpse into her pregnancy journey. Stassi Schroeder is six months along. As per Us Weekly, 32-year-old took to her Instagram Stories to share a photo of her baby bump. In the post, Stassi revealed the three things her unborn baby girl enjoys.

“My baby enjoys Cinnamon Toast Crunch, watching Outlander and sucking every last bit of energy I have,” she jokingly captioned the photo posted on Sunday, July 19.

In the photo, the social media star is seeing lying in bed with her hand on her belly. Her dark gray sweatshirt is pulled up while her gray sweatpants are pulled down to show off her bump. Stassi last showed her bare belly on Tuesday, July 14 with a selfie from her OOTD mirror.

“Now if only I could gain this in my bum,” the pregnant reality star joked on her previous Instagram Stories.

Stassi has a good sense of humor during her pregnancy. Bravo fired her and her friend Kristen Doute for their past racist comments and actions. Despite the drama, she wants to move forward with her life. Just a year ago, she revealed to Us Weekly that she was “ready” to start a family with Beau.

“I know I want to be a mom, so I would rather get knocked up before I waited to have a wedding,” Stassi said at the time. “People have told me that a lot of women when they get pregnant, they hustle even more.”

Since her announcement, Stassi and Beau have been busy preparing for parenthood. The couple even received gifts from fellow Bravo personalities.

Fans create a petition to get her back on Vanderpump Rules

Stassi Schroeder was part of the Bravo series for eight seasons prior to her firing. Now there’s an online petition calling for her to return to the show. A petition posted on Change.org has over 25,000 signatures, as per The Blast. The petition’s organizer, Nicole Ryan, explained her reason for getting Stassi back on television.

“The event that took place over two years ago, was not ok. The actions by Ms. Schroeder and Ms. Doute were out of ignorance,” Nicole wrote. “But if we have learned anything during these last few weeks, it’s that these hard conversations need to be had. Firing these cast members for something that happened years ago, is more harmful than helpful.”

But her racist past caught up with her. It’s about more than the Faith Stowers situation. Stassi posed in a “Nazi chic” outfit and made inappropriate comments about Black Lives Matter on her “Straight Up With Stassi” podcast. On June 7, Stassi said that she wants to “continue to take better accountability for what I have said and done.”

Would you like to see Stassi Schroeder return to Vanderpump Rules? Sound off below in the comments section.