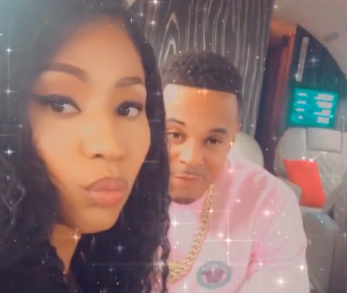 The 37-year-old rapper recently announced her pregnancy on Instagram. She is expecting a child with her husband, Kenneth “Zoo” Petty. We’re so happy for this growing family!

Nicki and her future husband began dating when they were teenagers. Zoo had a few run-ins with the law over the years, but Nicki feels “confident he’s matured.” She also describes him as “one of her first loves.” They drifted in and out of each others’ lives before making their relationship public again in 2018.

Ten months ago, Nicki Minaj said she planned on retirement so she can focus on building a family. Just one month after the announcement, she married Zoo. She discussed the possibility of marriage on “Queen Radio.”

“We did get our marriage license,” Nicki says in the interview, “I think I have what I was striving for, just happiness. It was so hard to get to a happy place. Now that I’m there, I don’t want to compromise that for anyone or anything.”

Last August, she changed her name to “Mrs. Petty” on Twitter. A few days later she revealed that the couple had their marriage license and planned to tie the knot within 90 days. On October 21, 2019, the couple married. Nicki announced the news on her Instagram:

Nicki Minaj is among several celebrity moms expecting little ones this year. Both Bella twins, stars of WWE and Total Bellas, are expecting babies this year. Like our favorite rapper, Nikki, the Bella twins also did maternity shoots. However, theirs look a little different.

While Nicki Minaj chose lots of vibrant colors, the Bella twins opted for a nude black and white shoot where they posed together. The Bella twins said it was a very empowering experience and they’re glad they get to share their pregnancy journey with one another. Both shoots look absolutely gorgeous and are empowering to all three women.

Nicki’s longtime rival, Remy Ma, is also expecting this year with her husband, Papoose. This will be their second child. They are already the parents of a little girl, Reminisce Mackenzie.

Remy Ma and Nicki Minaj famously produced diss tracks aimed at one another. Hopefully, their rivalry won’t pass down to their children.

Are all these babies a result of the quarantine? Perhaps. We bet we’ll see several more pregnancy announcements in the next few months. Best of luck to all the new parents out there!

Do you think Nicki Minaj will have a little boy or a little girl? We just hope mother and baby will both be healthy. Stick around for more celebrity news! You can always count on TV Shows Ace to help fill you in.