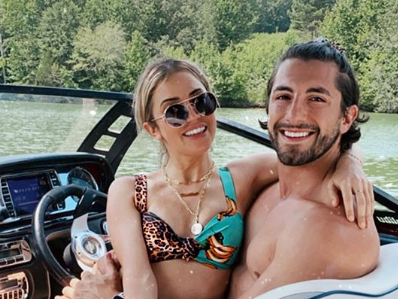 Kaitlyn Bristowe of The Bachelorette spent the weekend with her boyfriend Jason Tartick at the lake. She made sure to share pictures of them together in swimwear looking gorgeous. They were spending time with a group of friends enjoying a boat and swimming. Tartick wore turquoise swim trunks. Some of the other pictures showed the two drinking and sunbathing with their buddies.

Jason drove the boat while Kaitlyn sat on his lap. In her post on Instagram she makes a point to mention Jason’s leopard print scrunchie. It’s cute because it matches her swimsuit. Her bathing suit had leopard print and bananas.

I feel how I look. Anyone else plan on staying horizontal for the rest of the day?

Like any good Instagram star Kaitlyn Bristowe changes costumes. In a different picture she is drinking a can of hard seltzer while wearing an orange and pink Beach Riot bathing suit. According to the Inquisitr, her post has already surpassed fifty thousand likes. In one group picture, Jacob has a cigar in his mouth as he drives the boat wearing a blue bandana around his neck. There is also a video of them all dancing on the boat.

Bristowe like many people living in a changed world because of COVID said she didn’t want the weekend to end. Fans first came to know her when she was engaged to Shawn Booth at the end of her season. Afterwards, she hooked up with Jason and didn’t look back. While they have hinted at an engagement, they haven’t taken that step yet.

Fans Love Her Look And Her Relationship

Fans of Kaitlyn Bristowe are happy for her and her cute relationship with Jacob. One said, “so glad to know you two love birds are having fun. You make the perfect couple!” Another commented on the Instagram pictures, “I love you guys! Such a sweet couple! All the best for y’all.” Fans know both of them because Jason Tartick was a contestant on Becca Kufrin’s season of The Bachelorette. When two people from the franchise find each other, fans love it even more.

The two certainly seem smitten with each other. According to Elite Daily, Tartick has gushed about her since the beginning of their relationship. Tartick said, “she is a leader amongst her peers. While facing adversity and having support, but facing haters, she stays true to herself.” Kaitlyn is also not shy about sharing her love. In June she posted on Instagram, “Out of all my proudest accomplishments, you’re my favorite one,” she wrote. “It’s your fault I’m this happy!” Bristowe recently scored a coveted spot on Dancing with the Stars. No doubt Jason will be there to cheer her on every minute. Fans of both shows can’t wait to see what their future holds.