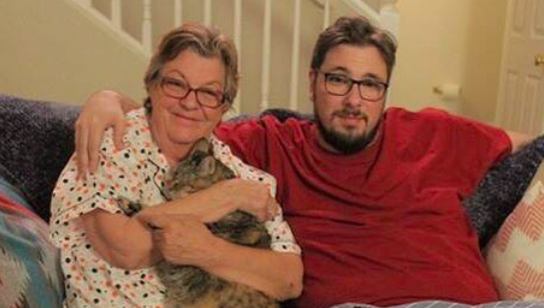 Colt Johnson finally clapped back at his mother Debbie on Sunday’s episode of 90 Day Fiancé: Happily Ever After?.  The 90 Day Fiancé star’s anger comes after Debbie met his new girlfriend, Jess, in Brazil. And it did not go well.

Debbie decided to join her son Colt on a trip to meet Jess’s family in Brazil. She wanted to make the trip down to South America to make sure Colt was not making the same mistake twice.

Jess is not the first Brazilian beauty to walk into Colt’s life. His ex-wife, Larissa, used him and has left big trust issues with Debbie.

According to Entertainment Tonight, when they got to Brazil, Debbie found herself in disbelief of what Colt and Jess were already talking about. The two love birds were discussing what they were going to name their kids and showing off some wild PDA.

Debbie additionally lashed out at the couple because she wanted to relax and be left alone after their 15-hour flight. She yelled and cursed at Colt and Jess then slammed the door.

Jess was definitely offended by Debbie’s behavior. She did not make a good first impression.

Happy birthday to my mom, Debbie @motherdebbiej. I love you very much and I want to thank you for always being there for me. You are the best mother I could have asked for. Happy birthday 🎂 #90dayfiance #tlc

Colt later confronted his mother when it was just the two of them.

Debbie attempted to justify her actions. She once again said she was just tired from their long trip. Colt shot back saying that didn’t mean she had to “act like an a**hole.”

The 90 Day Fiancé star continued telling his mom he felt like she was trying to sabotage his relationship with Jess.

The two came to an agreement that Debbie would spend more time with Jess to try to get to know her.

Overall, she is worried about Jess’s intentions. She is afraid Jess only wants to marry Colt to have children for the purpose of becoming a US citizen.

Debbie went on to tell cameras, “I don’t know if Jess understands the bond that Colt and I have. If she tries to break it, she’s gonna be in for a rude awakening.”

Meanwhile, Colt is not the only one experiencing relationship drama. Colt’s ex-wife, Larissa also got back together with her ex-boyfriend, Eric, on Sunday’s episode.

Larissa and Colt were once married, but the pair had an undeniably toxic relationship. She was using him for his money and a green card. Additionally, she got arrested multiple times for domestic battery and did not get along with Debbie. The 90 Day Fiancé stars eventually divorced and both appear to be doing much better apart.

What do you think of Debbie’s actions towards Colt’s new girlfriend? Let us know what you think in the comments below. Be sure to watch new episodes of 90 Day Fiancé: Happily Ever After Sundays at 8 pm E.T on TLC.

Mama June Reveals HUGE Weight Gain & What She Will NEVER Do On TV
‘When Calls The Heart’ Showrunner’s Wife Asks Hearties To Not Leave Show
Jim Bob Duggar’s Quotes On Rape Resurface After Josh’s Arrest
Josh Duggar’s Lawyer: Molesting His Sisters ‘Not Relevant’ To Charges
Derick Dillard: Duggar Family Fame Should Have Died With ‘19K&C’