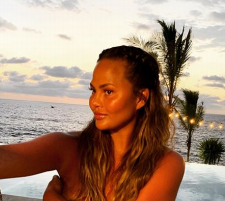 One thing we love about Chrissy Teigan is how open and honest she is; you know where you stand and she tells it like it is. Teigan admitted to having breast implants during an interview earlier this year, and during the same interview she said she wanted to have them removed. Teigan said she had been considering getting the implants removed for months, “I want them out now.”

Teigan made her modeling debut in the 2010 Sports Illustrated Swimsuit Edition, and it was around that time Chrissy stated that she chose to get breast implants. She said, “I thought if I’m going to be posing, laid on my back, I want them to be perky!” This career decision is not uncommon in Hollywood, but after having two children the LipSync Battle host says, “They’ve been great to me for many years but I’m just over it”. Of course there were people that wondered why she would want the implants removed when Teigan is already exceptionally beautiful. Chrissy said, “…[Y]ou have babies and they fill up with milk and deflate and now I am screwed.”

Teigan has been very candid stating, “A lot of people are understandably curious (and nosey!) so I’ll just say it here: I’m getting my boobs out!” Chrissy is doing what is best for her and her body. She went on to say, “I’d like to be able to zip a dress in my size, lay on my belly with pure comfort! No biggie! So, don’t worry about me!” Teigan wanted to be comfortable in her own skin again, so she had the implants removed.

Hi hi! So I posted myself getting a covid test on the twitter, as I’m getting surgery soon. A lot of people are understandably curious (and nosey!) so I’ll just say it here: I’m getting my boobs out! They’ve been great to me for many years but I’m just over it. I’d like to be able to zip a dress in my size, lay on my belly with pure comfort! No biggie! So don’t worry about me! All good. I’ll still have boobs, they’ll just be pure fat. Which is all a tit is in the first place. A dumb, miraculous bag of fat. ❤️

The Cravings author posted after that the surgery had gone “perfectly” and she has been recovering at home. Teigan has had the most amazing support system throughout this process. She posted a picture of a cake her friends Meghan Mackenzie and Luke Dillon brought her. The hilarious confection had a tombstone that read “RIP 2006-2020”, for the years Chrissy had her implants. The cake also sported a set of icing boobs to butte.

Chrissy’s daughter, Luna, also did her part by making her mom a homemade card that said, “Bye Boobies”. Teigan has been posting several pictures since her surgery that show she is very happy with her body post-surgery.

But there will always be a few people who doubt and deny whatever someone may post. Those doubters have apparently been questioning Teigan’s friends about the validity of Chrissy’s implant removal surgery. And Teigan has had enough. Chrissy took to Instagram to silence the skeptics. She posted censored pictures of herself post-surgery as well as a pre-op picture with the caption “Trust me”. She said, “A few of my friends keep having to tell people that I really got my implants out because [no one] believes it. These are the scars.”

I sincerely hope that is all she has to do to silence the nay-sayers. I wish her well during her continued recovery.

‘OutDaughtered’: Adam & Danielle Take Kids On WILD Adventure
Lala Kent Reveals ‘Shocking’ Truth About Her Relationship With Randall
‘Below Deck Med’: What Made Lexi Wilson Fire Back At Producers?
Wells Adams Finally Gets Shot At Hosting ‘BIP’
Is Kendra Duggar Strapped For Cash After ‘Counting On’ Cancelation?