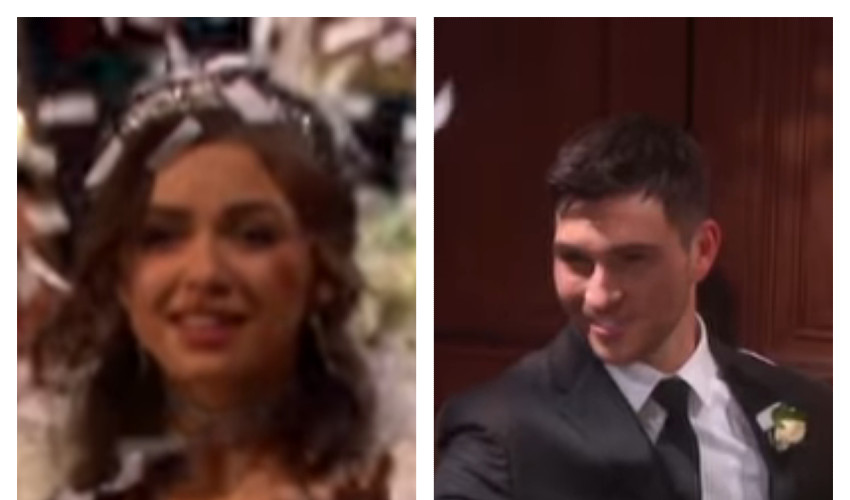 Of the four weddings Days of Our Lives has this month, it seems only 2 out of 4 couples end up hitched. Lani and Eli (Sal Stowers and Lamon Archey) are happily wed after a few interruptions. Nicole (Arianne Zucker) and Eric (Greg Vaughan) may not have had a wedding cake, but they’re out of Salem on their honeymoon.

Justin (Wally Kurth) called off his wedding to Kayla (Mary Beth Evans.) He knew she had feelings for Steve (Stephen Nichols.) Steve and Kayla are also globe-trotting off-screen.

This week’s wedding belongs to Ben (Robert Scott Wilson) and Ciara (Victoria Konefal.) Unfortunately, the couple never make it down the aisle. Someone has it out for them and takes drastic measures to ensure the wedding bombs. By setting an actual bomb.

The weekly DOOL promo reveals that a bomb is somewhere in the church ahead of Ben and Ciara’s nuptials. Not only that, the person responsible also locks the doors from the outside.

Spoilers say that Allie (Lindsay Arnold) is in danger after the explosion. Xander (Paul Telfer) plays the hero, which may help him woo back Sarah (Linsey Godfrey.)

Sami (Alison Sweeney) and Lucas (Bryan Dattilo) rush to the hospital to be by their daughter’s side. Allie may end up going into labor early. Rafe (Galen Gerig) has an answer by the end of the week about adopting Allie’s baby.

Spoilers also indicate that Claire (Olivia Rose Keegan) is cut from her role as Ciara’s Maid of Honor. In fact, she doesn’t attend the wedding at all. However, suspicion for the bomb falls on her, though she swears her innocence. Online chatter puts the blame on Eve Donovan, as Kassie DePaiva is set to return to Salem this summer.

As fans know, soap icon Louise Sorel also came back to DOOL as Vivian Alamain. However, it seems her time in town may be short lived. In the extended promo, Gabi (Camila Banus) has bad news for Jake (Brandon Barash.)

Vivian’s manservant Ivan informs Kate (Lauren Koslow) of Vivian’s ‘death.’ As Vivian is her sworn enemy, Kate gleefully asks if Vivian suffered. Jake asks Gabi to be his plus one at the wedding. However, it seems the two skip out and drink champagne instead.

When the DNA results came in, Jake wanted nothing to do with Vivian. At the time, Gabi and Vivian joined forces to get Jake to remember being Stefan. Last week, viewers and Vivian found out that Jake IS her son, but not Stefan. Could Vivian’s ‘death’ be a trick by Gabi and Vivian?

Ben’s sister, Jordan Ridgeway, may be dead, but she’s still on Ben’s mind. Leading up to his wedding to Ciara, Ben dreams of Jordan.

Dream-Jordan is donning a wedding dress, hysterical that it should be HER wedding. Ben is shaken by the dream, but goes through with the wedding anyway.