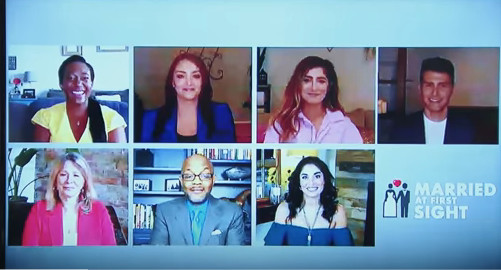 The Married at First Sight matches from New Orleans have not even made it down the aisle yet. But already, the arranged marriage reality show is stirring the pot and perhaps the potential for problems.  In this week’s July 15 premiere of Season 11, fans got to witness the brides and grooms getting good news: they had been matched with their possible lifelong mates.  Some got full support when they told friends and family about taking their vows with a stranger. Others got the expected “Are you crazy?” disbelief.

Viewers got to celebrate selecting the wardrobes with the spouses for their special day. The bachelor and bachelorette parties also ensued.

At the close of the episode, the attention was on Karen and Miles.  The Married at First Sight experts were very enthusiastic about these two, especially Pastor Cal.  He stressed that they had the stuff to become a true “power couple” in Married at First Sight history.  Karen was struggling with her own decision and the doubts of her mother over the process.

“Something happened last night,” disclosed the bride before asking to speak to the production staff.  Karen made a disclosure that seemed very straightforward.  Married at First Sight, however, seems to regret revealing the information so early, per a YouTube video posted on July 16.

The last time fans saw Karen, she was taking the staff behind closed doors to explain that she received a text with the name of her prospective groom.  The name “Miles” was in the subtitles.  She went on to say that she investigated his Instagram profile.

Karen elaborated in some detail that the sensitive, emotional side of the man with whom she was matched “really isn’t my type.”  On the other side of this interaction. Miles and his groomsmen are seen ready to go “all in” on the big day.

The newly-released July 16 video features host Kevin Frazier explaining that the voice behind the closed doors has now been altered. This was to protect “identity” until the right time comes for the reveal.  The video opens with a discussion of whether the experts have ever been wrong about a match.  Dr. Pepper Schwartz admits “I’ll cop to this one. “  Sometimes all the interviews and deep questioning doesn’t give a true picture of a person.

Every Married at First Sight follower remembers the disaster of Mindy and Zach last season.  The sad cycle of demeaning and deception between Luke and Kate in Season 8. It’s hard to forget.

In this case, however, it is impossible to un-see and un-hear something already revealed.  Fans love to see love overcome on Married at First Sight. Let’s hope that Karen can give her forthcoming wedded situation a chance before making more judgments.  Willing hearts can often do the impossible.

No matter what happens after his time at the altar, Miles already has one friend who senses his “good soul” completely—Bennett, the husband-to-be of Amelia on Married at First Sight.  Miles immediately connected with genuine heart and authenticity in Bennett when the guys met before the bachelor party.  “I know we’re gonna be friends,” he predicted.

Bennett confessed that he usually prefers a more quiet evening, but  let loose at the bachelor party. He was even showing some moves as he danced with the strippers.  Miles’ best friend is Woody, also in this Married at First Sight season.

The censors blotted out any inappropriate parts and none of them were Bennett’s.  The quirky groom took it easy on the booze, too, unlike his fellow grooms. However, Brett caught a ride home before the other grooms ended the evening with a cigar toast.

Bennett wanted to wear his special brocade embellished cap with elephants on it for his wedding. Luckily, his female friends discouraged the idea.  Instead, they urged him to let his bride shine.  Amelia was a vision twirling in her “floofy” dress.  This delightfully different pair has a huge cheering section, so they should at least be the second couple to say “I do.”

Bennett and Amelia … just go ahead and give them their own spin off right now. #MarriedAtFirstSight

Other faces may be familiar in this season

The three Married at First Sight experts have stressed that New Orleans is the smallest city chosen by the series.  The grooms have already discussed the possibility that they may know their future brides.  It doesn’t mean that it has to be a deal-breaker.

In the preview peek for this season, one bride is heard to say, “I’ve met him before.”  With the rapid camera cutaways, it’s hard to tell exactly which one.  In the matchmaking special, the experts gave a high-five for “the best season ever.”  Previews dub Season 11 as “the craziest season ever.” After the trainwrecks of Season 10, it’s hard to imagine how it can be both in 17 Married at First Sight episodes.

Whatever happens, fans will be along for the ride in New Orleans with these Married at First Sight hopefuls.

Jim Bob Duggar Snubbed By Nearly Entire Family — Including Michelle
Who Will Be The Next ‘Bachelor’? One Contestant Reportedly Getting ‘The Bachelor’ Edit
Josh Duggar Prohibited By Court From Seeing His Sister Jessa’s New Baby
Shirtless Garrick Merrifield Flaunts What He’s Got Amid The Hate
‘Wild West Chronicles’ Finale Exclusive: Artist Charles Russell Married Very Well