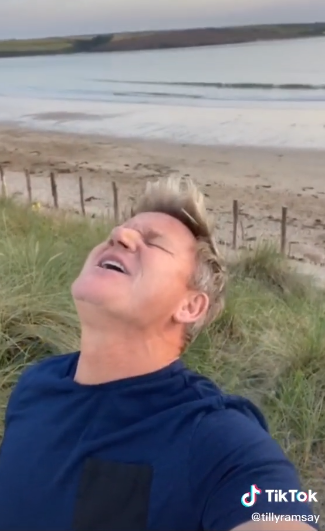 We love seeing glimpses of Gordon Ramsay being a dad. He may be harsh in the kitchen, but he really has a soft spot for his kids. Gordon’s 18-year-old daughter, Tilly, recently talked him into creating a TikTok video. For those unfamiliar with TikTok, it’s a popular social media app for sharing viral videos and making memes. There’s no doubt Chef Ramsay’s video will inevitably turn into a meme.

Tilly sent her father the lyrics to “Interior Crocodile Alligator” and asked him to film himself singing the words. It’s definitely worth checking out. Could Chef Ramsay be any more of a dorky dad? Fans can’t get enough of Tilly’s video.

Celebrity chef Gordon Ramsay has a reputation for being a hothead in the kitchen. However, he couldn’t be any softer when it comes to working with children. He’s also known for being a gentle culinary guide for budding chefs on his show, MasterChef Junior.

During quarantine, Chef Ramsay posted fun cooking videos on his Instagram page. However, it is clear he also loves spending time with his kids. He recently posted a video of his youngest, Oscar, walking their pet dog.

We definitely see the family resemblance. Oscar looks just like a mini Gordon!

Practising in my kitchen

The past few months have certainly been difficult for those in the restaurant industry, Gordon Ramsay included. In fact, he only recently announced his London-based restaurants are allowed to reopen. He posted an Instagram video sharing the good news on July 4. He’ll likely have his hands full for the next several months.

Gordon Ramsay: Uncharted has certainly been keeping fans entertained during quarantine. Fans are really missing out if they’ve not watched yet. Most recently, the celebrity chef traveled to India, the spice capital of the world. Those who love learning about different cultures and cuisine, make sure to check out the show. Fans can tune into Gordon Ramsay: Uncharted on Sunday nights at 10 PM on the National Geographic channel.

This show and his Instagram may be the only ways to get your Chef Ramsay fix for now. There is little word on when the new seasons of his other shows will premiere.

Follow Chef Ramsay on Instagram via his handle @gordongram to keep up with all the latest news. From cute kid videos to cooking tutorials, he’s definitely worth following.

Make sure you regularly check back with TV Shows Ace and stay informed! We have all the latest celebrity and television news you could ever want.