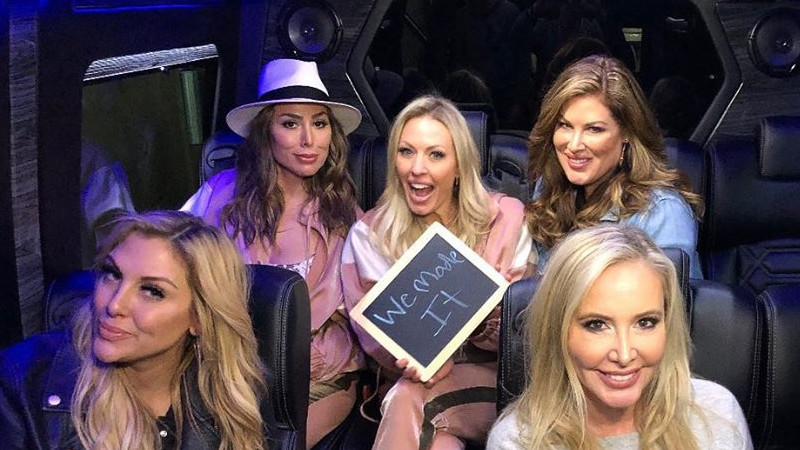 The Real Housewives of Orange County stars are getting out of town. The five confirmed cast members are filming a getaway together. Gina Kirschenheiter accidentally spilled the beans about the trip on her Instagram. She’s since reposted the telling photo with a new caption. But she didn’t delete it fast enough – screengrabs are still floating around online. See her original caption below.

Earlier this week, Gina Kirschenheiter took to Instagram to share a photo with her followers. In the photo, Gina is dressed casually, leaning against a very large suitcase. She’s also wearing a mask. All signs that she’s going on a trip. Gina debuts much-shorter hair. She took out her extensions during quarantine.

In the photo’s original caption, Gina doesn’t specifically say anything about RHOC or her co-stars. In fact, her caption is quite vague. It said, “Here’s a novel idea…Quarantine us all together. I’m sure it’s gonna go great.”

#GinaKirschenheiter is all set for her mini girls trip!😍 #RHOC

Many fans took her attire, suitcase and caption to imply she’s going on a trip with her RHOC co-stars. Page Six reports RHOC newbie Braunwyn Windham-Burke also mentioned a trip on Instagram. The outlet wrote that Braunwyn had a “family bed” because she was going on a “girls trip” the next day.

The post was put on Instagram Stories, which automatically deletes in 24-hours or less. However, a fan managed to grab a screenshot of Gina’s original caption.

Gina later changed the caption to “Take two” with a heart emoji, followed by a shrug emoji.

Who-All Is Returning For Season 15?

It’s been a while since the RHOC Season 14 ended. In early 2020, Tamra Judge and Vicki Gunvalson both left the show. Whether they left willingly or were fired is still unclear, depending on who you ask.

Along with Gina and Braunwyn, Shannon Beador and Emily Simpson are returning. Kelly Dodd is also coming back, despite the best efforts of fans to get Bravo to fire her. Page Six notes that a girls trip won’t phase Kelly, as she’s been traveling back and forth from NY and CA during quarantine.

There was a rumor months ago that Elizabeth Vargas, CEO of Edge Music Network, is joining RHOC this season. There was even a video of her filming with the other ladies before COVID-19 shut down production. However, it’s possible she was appearing in a ‘friend’ role.

RHOC Will Be Available on Peacock TV Soon

Another streaming service has entered the chat. NBC launched Peacock TV on Wednesday, July 15. The service will feature classic NBC shows as well as new shows created specifically for the service, such as a Punky Brewster reboot. Movies from Universal and DreamWorks will also be available.

The service will have varying tiers. Some content will be available for free, but users will need a paid subscription to access other content. Subscriptions start at $4.99/month with ads.

Bravo, which airs The Real Housewives franchises, is owned by NBCUniversal. Gina posted a teaser on Instagram following the launch of PeacockTV. She lets fans know that RHOC is “coming soon” to the streaming service.

Check back with us for updates regarding when The Real Housewives of Orange County will begin airing Season 15.