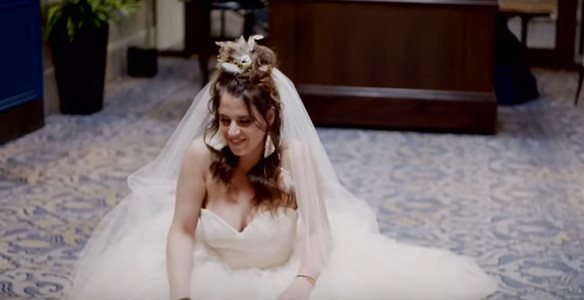 Fans of Married at First Sight have been counting the minutes until the Season 11 July 15 premiere ever since introducing the couples in last week’s preseason kickoff special.  If there was any downside to the start of the new season on Lifetime, it was only that not much new happened for the five hopeful pairs from The Big Easy.

There was a lot of footage already seen in the matchmaking special shown again in the premiere episode, “The Story Begins,” but Married at First Sight devotees are so ready to see success stories for matches in it for the right reasons, no one really minded seeing it the smiles and stories again.

Married at First Sight expert, Pastor Cal Roberson really believes in Miles and Karen to make it all the way.  He couldn’t say enough good things about their potential when he counseled with Dr. Pepper Schwartz and Dr. Viviana Coles.  It didn’t take much to win the ladies over to his side, but the reality of entering into marriage is getting real for the 26-year-old sensitive school administrator and the 30-year-old in human resources who is wary from past hurt.

These two have the ingredients for their version of Married at First Sight success, but during the final minutes of the premiere, Karen divulged to the production staff that she might not be able to go through with saying “I do.”

The Married at First Sight brides and grooms-to-be met with their families and friends to share the news that they would be walking down the aisle within two weeks.  Miles’ parents divorced when he was young, and he describes that “they were never really friends.”  He found a steadfast example in love from his grandparents.  He broke the news to them via a computer and asked them to be at the wedding.

The beloved elders confessed that “this is not something I would do” as the grandfather said, but they will certainly be in attendance.  Both echoed that Miles is “a kind person,” and they only hope he doesn’t get hurt.  This guy is so sensitive that he keeps every handwritten card he’s received in the last several years.  Pepper Schwartz found them on his refrigerator, so he’s going into his  Married at First Sight journey with a willing heart.

Karen says that she “can’t imagine going forward with this experience without my mom’s support,” but mom didn’t show rousing support with her daughter announced the nuptials.

“Are you out of your mind?” she asked Karen.  Caroline, a close friend of the bride, also seemed wary, suggesting that “dating is hard these days.”

Karen was previously involved in a five-year relationship with a man who fathered a child with another woman while Karen thought he was faithful.  It is understandable that any mother would want to protect her daughter from similar pain.  Trusting the process is the biggest part of the Married at First Sight experience, and Karen and her mom are likely to struggle in that area.

The right dress helps the ‘Married at First Sight’ decision

Despite concerns over the methods of Married at First Sight, Karen’s mother and friends are there to help her choose the perfect bridal gown.  When her mom remarks on how stressed she looks, Caroline says that the would-be bride has been like that for days.

After three tries, Karen looks like a vision, or rather, “a goddess” as her mom insists as her daughter walks out in a lovely fitted dress with delicate lace covering the neckline, back, and sleeves.

“I think this dress makes me think I will walk down the aisle,” Karen confirms.  She also says that “a few more” glasses of champagne will help.  Mother beams in the moment to see her daughter as a bride.

At his fitting, Miles is committed to “looking like the best husband” and tells the fashion consultant that “I want to make her knees buckle” when his wife sees him, as TV Fanatic noted on July 15.

One of the unique elements of Married at First Sight New Orleans is that Miles’ best friend, Woody, is also a groom.  Miles also formed a very fond connection with the free-spirited theater director, Bennett, who is already a fan-favorite bound to his bride-to-be, Amelia.  It will be a great ride to see the bromances grow along with the marital bonds.

Some of his friends think that Woody is still too much of a “wild one” to be tamed by love, but agree that Miles is already husband material.

Karen has a case of TMI before taking her vows

Her bridal party is there to celebrate, but Karen is in tears on the morning of her wedding.   She asks to speak to the Married at First Sight production staff behind closed doors.  Although cameras have no access, Karen divulges that she already knows the name and identity of her groom.

Karen doesn’t seem pleasantly surprised by her proposed groom’s sensitive side.  “He’s just not my type,” she says flatly, elaborating that if a friend suggested that she look at this guy, she wouldn’t see anything special.

The producer speaking says that the decision is totally up to her to decide if she can proceed with her Married at First Sight journey.   While she utters another “I don’t know,” the cameras turned to Miles, ready to walk out the door to his wedding, virtually certain he will meet his lifetime love, already dubbing her “Baby Girl.”

Fans will have to wait until next week to see the rest of this story unfold, and how too much information can cloud what could be a bright future.

Married at First Sight airs Wednesday on Lifetime, and TV Shows Ace will keep you up-to-date on all the exciting adventures ahead for the Season 11 couples.