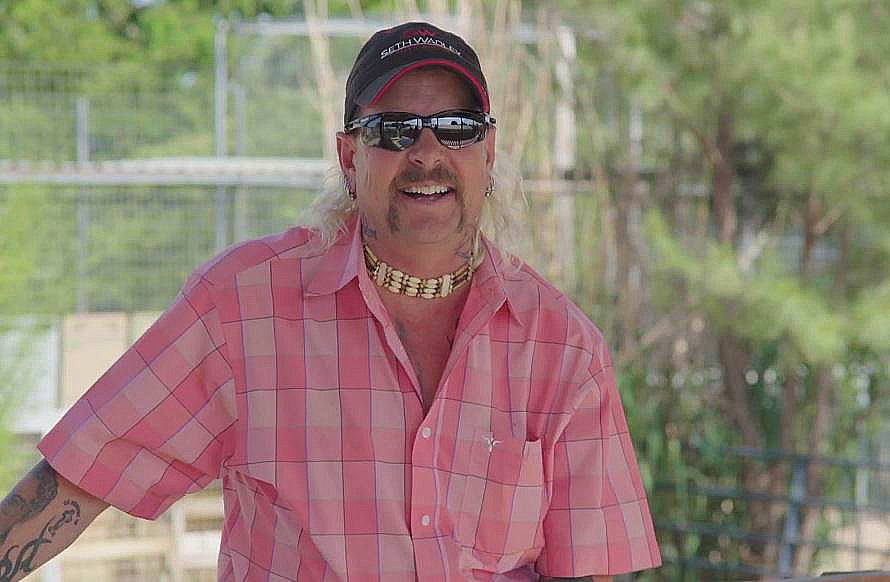 There has never been anyone like Joe Exotic on television. The infamous zookeeper was relatively unknown until Netflix’s bizarro look into the Oklahoma big cat aficionado’s world became a streaming sensation.

And since the documentary hit the streamer at the beginning of the pandemic, millions watched the story of his stranger than fiction life unfold.

Now Animal Planet has a documentary that focuses on the animals that made it out alive and examines what the effect Joe Exotic had on his peers,  employees and especially the abused tigers.

Surviving Joe Exotic will detail the atmosphere of working alongside the now incarcerated roadside zookeeper and the aftermath of his unhinged vision.

What is Surviving Joe Exotic about?

The action at the G.W. Zoo is where Animal Planet’s all-new documentary special, Surviving Joe Exotic will focus. The bonus for fans of this ongoing sage is that Animal Planet has secured one of Joe Exotic’s last formal interviews before his arrest.

Now viewers will follow the emotional stories of the surviving animals that made it out of the zoo for a second chance at life.

Many never had that chance and were allegedly killed at the hand of Joe and others at the park.

The documentary will also hear from ex-employees, including Saff Saffery.  Saffery was the devoted employee whose arm was taken by a tiger, yet he harbors no ill will.

Producers will also talk to rescue leaders, exotic animal experts, and others with firsthand knowledge of the animal trafficking and breeding that fueled Joe Exotic’s empire.

Background on Joe Exotic and his zoo

The story behind Joe Exotic and the infamous G.W. Zoo left the audiences reeling from the allegations of lies and total deception which came to light with uncovered wildlife violations at the center.

The viewers will be given the animal survivor POV as we follow the emotional stories of animals that made it out of the zoo for a second chance at life, and hear from ex-employees, including Saff Saffery—who lost an arm to one of Joe’s tigers—and others with firsthand knowledge of the animal breeding and unethical sales and bartering that helped to propel Joe Exotic’s empire into a cash cow until things went south for the man who married two of his lovers at the same time.

These interviews will be paired with never-before-seen footage of Joe filmed for Animal Planet’s Wolves and Warriors in 2018, as audiences will hear and see the stories of animals who were caught in the crossfire of Joe Exotic’s big cat breeding business.

It’s not all bad news as the producers sought out the heartwarming stories of those that found new homes after the G.W. Zoo.

In 2018, Animal Planet’s Wolves and Warriors film crew was given access to the G.W. Zoo and an inside look at Joe Exotic’s operations; from his stage show, the interactive tour, as well as never-before-seen interview footage of Joe. SURVIVING JOE EXOTIC features this exclusive interview footage of Joe from 2018 paired with all-new firsthand revelations from staff who worked side-by-side with Joe, including former employee Gaylynn Eastwood and former manager Saff Saffery. Both reveal new details about Joe’s breeding business, his behind-the-scenes treatment of the animals at the G.W. Zoo, and his dangerous dealings of trading in exotic animals.

Animal Planet audiences will also follow the incredible journeys of the animals who survived from under the direct care of Joe Exotic.

Featured are Kryxis and Kadira, two visually impaired tiger littermates whose vision was restored after their rescue from the G.W. Zoo through surgery at the Exotic Feline Rescue Center in Indiana.

Also we meet Chobe and Kariba, two lions found traumatized by the pain of inbreeding and spending their lifetimes in a small enclosure, who are relocated to Wildcat Ridge Sanctuary in Oregon where they can live out their lives in fresh air and on grass.

Animal Planet will follow these stories of survival and learn more about what’s next for the innocent animals who were caught in the brutal and hidden world of exotic animal ownership as they hope to break the cycle of neglect and mistreatment that exists in the world of big cat and exotics trade.