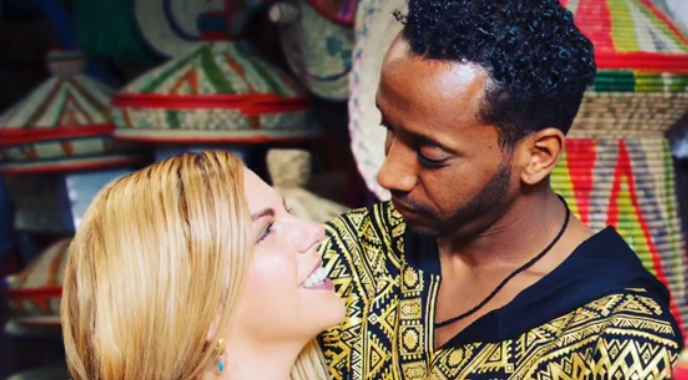 As 90 Day Fiancé: The Other Way fans know, a heavily pregnant Ariela has traveled to Ethiopia. However, Ariela and her love, Biniyam have just had their first major problem. This comes when Ariela’s mom, Janice, takes a look at where her daughter will deliver their baby. As a nurse, she is totally appalled.

Ariela met Biniyam during an extended visit to Ethiopia. Shen then returned to her comfortable life in Princeton, New Jersey. However, soon afterward, Ariela discovers she is pregnant with Biniyam’s child. This made Ariela decide to move to Ethiopia. She wanted to be with Biniyam and have their child there. Ariela was hoping for a family life with him and their baby in his home town of Addis Ababa.

Monday’s episode of 90 Day Fiancé: The Other Way sees the TLC reality stars having major problems. This is as Ariela’s mom, Janice sees their expected living conditions. Janice works as a nurse and had insisted on traveling to Ethiopia with her daughter. She wants to ensure living conditions there are suitable for Ariela and the baby. However, when Ariela sees the apartment Biniyam had chosen for her, she hates it. Moreover, when her mother Janice sees it, she totally rejects the apartment as “appalling.”

Janice goes on to say that she has been in other countries, but the poverty in Ethiopia is “extreme.” She bluntly tells her daughter’s fiancé that she is a “mess” right there. While she is not a snob, Janice says she comes from a “totally different culture.” She has been in places that are poor and says, admittedly, the people are nice. However, looking at this apartment, Ariela’s mom says the “conditions here are not safe for a baby.” Janice tells Biniyam he basically needs to realize where Ariela came from.

Ariela and Biniyam’s apartment has no water and more

Janice is shocked as she finds out the apartment Biniyam had chosen for them has no refrigerator. It also appears to have no running water. When she finds out Ethiopians use leaves instead of soap to clean the standing-water barrel, she is totally horrified. Janice says she had no words. The nurse in her adds, “Oh, great. I’m learning new infection-control procedures.”

Ariela’s mom tells the TLC cameras that it is “painful” for her to see her daughter there. Janice explains she has been a mother and a medical professional for over 35 years. She finds it “really painful” to see her daughter live in a place that is dirty and full of bacteria. Ariela’s mom continues by saying she was getting sick just being in the apartment, saying, “It’s appalling.”

90 Day Fiancé: The Other Way star Biniyam says the apartment is temporary

Biniyam goes on to reassure Ariela and Janice that the apartment is only temporary. They would only live there for two weeks. This is because he is busy getting another apartment ready for his family. The TLC reality star then takes Ariela and her mom to the second apartment. His fiancée basically takes one look and says it is worse than the first one. The apartment is nowhere near finished or ready for the family to live in. Janice told Biniyam he is being unrealistic saying the apartment will be ready in two weeks.

Ariela says the apartment is a mess. She adds the first one was bad enough. However, this second one is “just a disaster.” According to Janice, it would take an “army of guys” probably around a month to get the work done. She explains she understands what Biniyam is doing and appreciates it, but he has to be realistic.

Ariela is ‘disappointed’ with Biniyam over living conditions

As noted by ET, Ariela explains to the TLC cameras that she is “disappointed.” This is after everything she has given up to live in Ethiopia. Specifically, Ariela is unhappy that Biniyam doesn’t have a place ready for them to live in. She says Biniyam needs to learn what her expectations are. Ariela says she needs running water, she needs a toilet and a working kitchen. Moreover, she would also hope they would have electricity in their home.

Keep up with Ariela and Biniyam’s story on 90 Day Fiancé: The Other Way on TLC, Mondays at 9/8c.