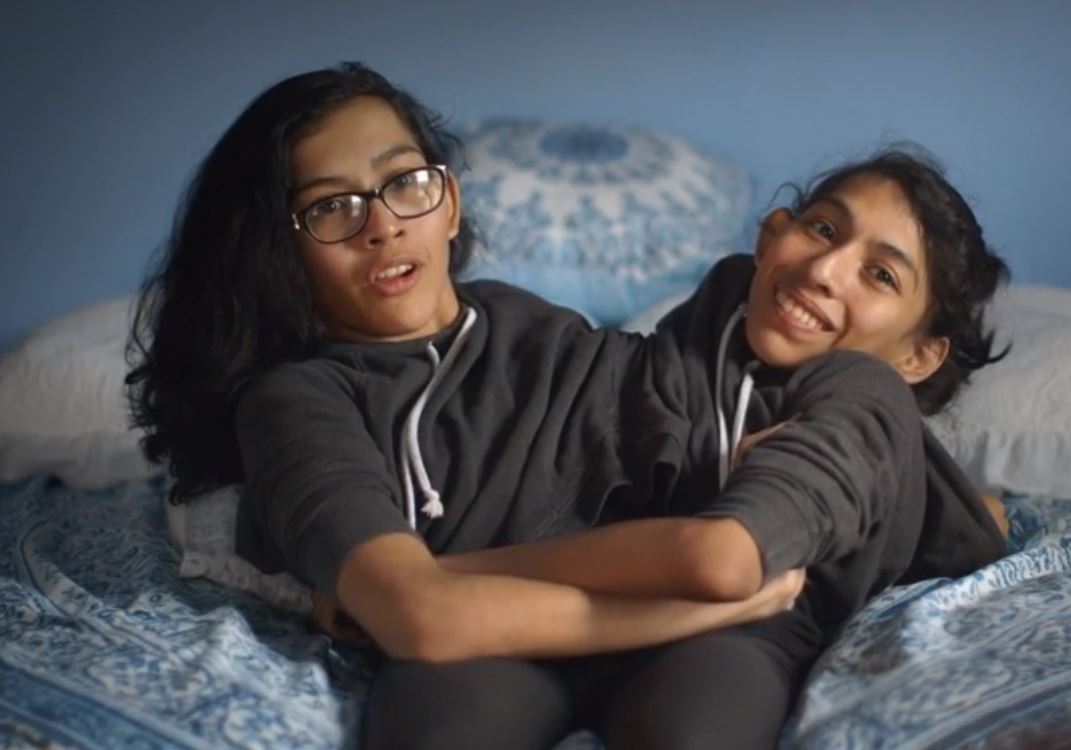 On TLC this Thursday we meet Carmen and Lupita Andrade, two smart and witty girls who are conjoined twins. These two sisters share that they have been asked “just about every question in the book.”

The two tell their own story thanks to TLC in the network’s new special, Conjoined Twins: Inseparable.

In TV Shows Ace exclusive preview, one little boy opens the preview clip and asks: “Tell the truth, how did you got into that body?” Carmen and Lupita’s bemused reaction is laced with humor and kindness.

They are two self-described “Mexican kids” trying to fit into America. and being conjoined is just part of their existence. They are now at the age where they can strike out on their own, and face new challenges and try to carve two lives with their one body.

About the Conjoined twins on Extraordinary People for TLC

Initially, their parents came from Mexico to the USA for surgery, but it was made clear that one child would die if that surgery separated the two children. The parents opted to keep them together and alive.

Carmen and Lupita are part of a small community of conjoined twins who have survived past infancy. The sisters are physically connected along their chest walls down to their pelvis where their spines fuse together.

The girls each have their own heart, a set of arms, a set of lungs and a stomach.  They each have two arms, but only a single leg. Carmen controls the right leg and Lupita controls the left.  They share some ribs, a liver, their circulatory system, and their digestive and reproductive systems.

They have sent years in physical therapy, perfecting their coordinated moves and ability to sit, stand and walk together. together. When they were 4, they took their first steps.

Carmen and Lupita’s personal insight on their condition makes this Extraordinary People special for TLC a no miss event.

In a 2017 interview,  the twins showed off their sense of humor.  The Hartford Courant wrote:

“Carmen is a strong student, witty, sharp-tongued and ambitious. Lupita is quieter, has trouble with reading comprehension and takes modified versions of tests, but like her sister can be quick with a pointed, often humorous remark.  “A lot of people don’t notice, like, because when they first meet us, we kind of have the same reactions …,” said Carmen. “But our friends, once they get to know us, our friends literally tell us, ‘You guys are so completely different,’ and I’m like, ‘Well, yeah. We’re two different people.'”

Carmen and Lupita are clearly two distinct people with separate personalities sharing not only their body but every moment of their young adult lives. Their story—now told by TLC—explores the challenges they accept some independence and prepare for college life away from their home.

This summer, the network launched a series of specials spotlighting extraordinary people living with challenging and uncommon circumstances

TLC is launching a series of specials spotlighting “the overlooked, the underrepresented and the misunderstood.”

The specials began on July 9, and included World’s Smallest Woman: Meet Jyoti, who was featured on American Horror Story: Freak Show for FX.

In a press statement, TLC’s senior vice president of programming and strategy Rick Holzman said the network is “proud to be the platform to share their stories, their struggles and their strength.”  He added: TLC honors people from all walks of life in our programming. These specials tell the unique and remarkable stories of people who face overwhelming challenges every day of their lives. And, while their conditions are extremely rare, those at the center of each story yearn for love, understanding, and a sense of belonging.”

You will love the spirit of Carmen and Lupita, two beautiful girls do not let their physical restraints hamper their individual dreams for a full and rewarding life:

Amy Roloff Gets MUSHY As Her Wedding Countdown Begins
’90 Day Fiance’ Molly Hopkins Is A BOMBSHELL After HUGE Weight Loss- See Pics
OH NO!!! One Of Todd Chrisley’s Children Confirms Divorce
‘You, Me, And My Ex’ Alex Hines STILL Defending Relationship With Caroline
Oops! Did Isabel Roloff Accidentally Spill Her Baby’s Name?