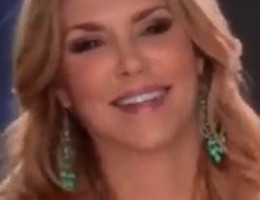 The Real Housewives of Beverly Hills alum Brandi Glanville never misses a chance to be crude. During her years on the Bravo show, Brandi was renowned for her unfiltered comments. She was a full-time star of the show for Seasons 3 through 5. Although she was let go after Season 5, she continues to appear in a ‘friend of’ role occasionally.

Viewers will recall that during Season 9, Brandi had drinks with RHOBH newbie Denise Richards. What a difference a season makes! While the two were friendly during Season 9, Brandi alleges that they once got a little TOO friendly. The former friends are no longer speaking after Brandi’s allegations of an affair, which Denise denies.

Denise Gets Cute on Instagram, Goofs on Iconic RHOBH Line

The Wild Things star doesn’t mind poking fun at herself. She took to Instagram over the weekend to share a silly video of herself reciting her iconic Season 10 line. In the video, Denise flips her hair for the camera, smirks and utters her famous line: “I’m f**king Denise Richards.”

The comment was said in response to the other ladies taking issue with Denise glamming it up during her second season compared to her “ragamuffin” appearance last season. Following the comment, Denise explains that she’s been on more magazine covers than the other woman can even name.

Many fans considered Denise a breath of fresh air last season, with her casual wardrobe and minimal make-up. However, during Season 10, Denise has found herself smack dab in the middle of drama with her co-stars. On the very first episode of the season, Bravo broke the so-called fourth wall to reveal that Denise refused to continue filming with her co-stars sometime in December.

The first half of the season was spent building up to Brandi’s accusation. In the meantime, Kyle Richards and the other RHOBH ladies seemingly took issue with Denise “mom-shaming” them by vowing not to bring her kids to events. Denise’s daughters inadvertently heard the women talking about threesomes and Denise wasn’t happy about the situation.

Denise’s video was meant to be a light-hearted joke at her own expense. However, once Brandi saw the post, it turned into something else entirely. Brandi quipped, “OMG ME TOO!” in the comments of Denise’s post. Implying that she, too, is “f**king Denise Richards.”

What a coincidence. #CommentsByCelebs #RHOBH

The Denise/Brandi Drama Begins This Week on RHOBH

In late June, RHOBH took a month-long hiatus for “editing” purposes. The show returned on July 8th with an episode in which Erika Jayne and the other women confront Denise. They are miffed that Denise keeps leaving events instead of resolving the mom-shaming thing. However, Denise is over rehashing the same old issues.

Her husband, Aaron Phypers, tried to intervene in the episode before the break. It did not go over well with the ladies. During the July 8th episode, they confronted Aaron about putting himself in the middle. Denise and Aaron, once again, left the event when the rest of the RHOBH cast tried to address the issue.

In the preview for the upcoming July 15 episode, Brandi finally graces our television screens. The former model is in attendance at Kyle Richards’ party. Denise is also in attendance.

However, at this point in time, Brandi hadn’t told the other women about the affair. That goes down episode 11, airing next week.