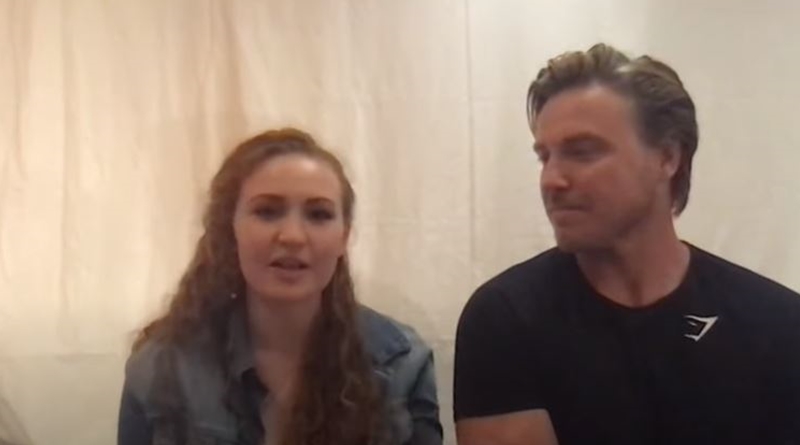 Below Deck Sailing Yacht veterans Paget Berry And Ciara Duggan finally got engaged. No big surprise really, but fans seem very happy for them. The announcement came on Instagram this weekend in a series of slides. Both of them shared the good news with their fans, and loads of congratulations went their way.

The photos and a short video clip that Ciara shared revealed Paget’s new haircut. So, fans joked that maybe she became engaged to someone else. But mostly, the reactions that came in expressed a lot of joy for the couple. Ciara captioned the pictures with, “Well folks, it finally happened 🥰💍.” Fans know that the couple seemed well suited together for ages now. Recall, they worked on the boat long before the rest of the crew arrived. And, as they both gave have experience in the yachting industry, they share a common passion.

In one photo, the Below Deck Sailing Yacht couple held some champagne flutes. Then, the next slide revealed a short video clip. Paget did the time-honored deed by getting down on his knee. Ciara sounded thrilled and blown away when he asked her to marry him. In one of the slides, she revealed her very colorful ring. Apparently, it all went down in Italy when they vacationed in Genova, People reported. One of the first crew members to congratulate them was Jenna MacGillivray. She commented, “So excited for you guys!!! You deserve all the love in the world.”

Fans react to the good news from Ciara and Paget

Over on his Instagram, Paget Berry wrote, “I did a thing 🙈 💍 @liveandsetsail ❤️ #engaged.” Further on in the comments section, he later put in a string of hashtags. These included “#mygirlfriendisbetterthanyours, #marriagegoals, #tietheknot, and “#itsabouttime.” One follower wrote, “Yay!!!! Congrats!!! So happy for you two! 🍾 🥂.” Another one commented, “Ahhhh !! What! So happy! Loved you guys on below deck !! Been waiting for you to pop the question to that most wonderful girl of yours!! ❤️👏😂🔥.”

Meanwhile, over Ciara’s post, Below Deck Sailing Yacht fans sounded happy and excited as well. “You two are precious. Thank you for sharing your lives with the world. Best wishes 💙,” one fan wrote. Another fan sent in a really nice message. They said, “So beautiful! Congratulations and warm wishes to you – enjoy the bliss and joy during your engagement!”

For fans of the show, it’s a nice moment free of drama, and the good news brings refreshing change. For many people, seeing this couple about to start the new phase in their lives brings a lot of joy. There’s way too much sadness and stress in the world right now, after all.