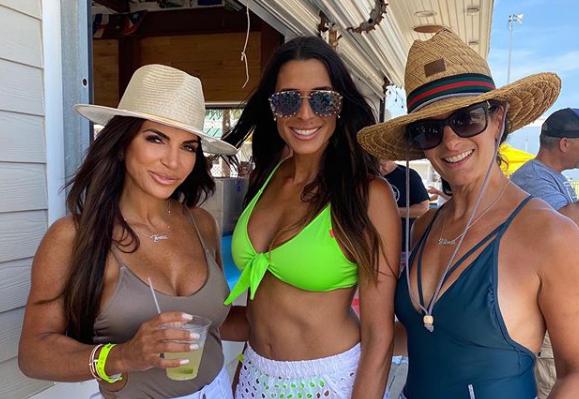 Tensions are high in the US with states requiring people to wear masks, and many citizens saying they’re not going to. When you’re in the public eye, like Teresa Giudice, more people know if you go out without a mask in public. The reality star posted pictures of herself with two friends at the beach. She captioned a picture of them with drinks, “Tequila and sunshine.” They are standing in front of a drink stand.

Those who saw the picture off her mask-less out in New Jersey have said she’s being disrespectful. The three friends show no signs they planned to social distance all close together. This has led fans to question whether they care about COVID-19 or not.

According to The Blast, fans are not impressed with Teresa Giudice seemingly ignoring the virus and going out into the world. One user said, “slap in the face to front line workers like myself, that can’t take a vacation because of PTO freezes. Life as usual for Teresa not a care in the world.”

Another commented, “do you not understand that there is an airborne illness killing people?” They continued saying it was a disgrace to see her partying and possibly spreading it around.

I truly love hosting & being the hostess with the mostess!😘 Such a beautiful Fourth of July with friends and family🇺🇸 Shout out to my favorites for making it that much greater! @jasonjani I never have a dull party beause of you! Thank you @partyperfectrentals for always making my parties look good😍 @charcuterie.chick this was the most amazing one I ever saw!!

She’s not the only star from the Real Housewives of New Jersey who isn’t really following the rules. Melissa Gorga, Jackie Goldscheider, and Dolores Catania also partied over the holiday weekend. Teresa joined her costars at Gorga’s home on Barnegat Bay in Toms River. According to the North Jersey website, the governor announced New Jersey is seeing “small spikes in reinfection” from residents coming back from hot spots.

Fans were also very opinionated about their lack of masks. One said, “When you have parties like this, people leave the party and if they are exposed they give to others! I do not live in fear and live my life every day but I wear a mask.”Other fans said this is why America is doing so poorly with the pandemic.

Of course there are some fans who don’t think Teresa Giudice did anything wrong. One fan said, “disregard these comments on a mask. Outside at the beach and the fresh air, you’re great!” None of the housewives have commented on fans comments, but they don’t show any signs of slowing down. This behavior has surprised fans the most because one of their cast mates, Jennifer Aydin has experienced Corona first hand. Both Aydin and her father tested positive and her daughter had some symptoms.  Time with tell if the cast members will get sick from their partying and fans will be paying attention to the group.