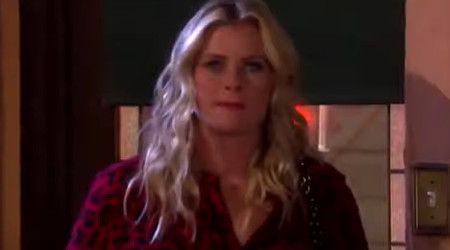 Days of Our Lives wasn’t kidding when they said fans would see one wedding a week in July. The weddings don’t always go to completion (looking at you, Kayla and Justin (Mary Beth Evans and Wally Kurth,) but the brides at least make it to the altar.

But perhaps Eric and Nicole (Greg Vaughan and Arianne Zucker) will have better luck on DOOL. Or maybe they won’t, since Nicole ends up in the wedding cake. But we’re getting ahead of ourselves. Alison Sweeny’s Sami returns to Salem just in time for her brother’s wedding. To Sami’s nemesis, Nicole. Will Eric and Nicole get a happy wedding like Lani and Eli (Sal Stowers and Lamon Archey) or another almost-wedding?

Sami is back in Salem and she is not happy with her brother’s engagement to Nicole. As DOOL fans know, Nicole and Sami have a long, long, LONG history of catfights and small bouts of friendship. However, Sami finds out that Nicole has been keeping Allie’s (Lindsay Arnold) pregnancy secret.

Not only that, Nicole and Sami’s daughter have formed a friendship of sorts. Add in the fact that Nicole has weaseled her way back into Eric’s life, and you have an extremely miffed Sami. She storms into The Brady Pub where Eric and Nicole are having what seems to be a small, impromptu wedding ceremony.

While spoilers indicate that Eric and Nicole DO get married, their reception doesn’t go so well. In the DOOL weekly promo, Sami tackles Nicole and the two fall into Nicole’s wedding cake as a horrified Eric looks on.

Stefan Finds Out His True Identity on DOOL

Last week on DOOL, Jake (Brandon Barash) got the shock of his life when the DNA results came back proving he is Stefan DiMera. But as any soap viewer knows, that’s not the whole story.

Her right-hand-man Ivan (Ivan G’Vera) has surprising news for DOOL fans and the trio: Jake isn’t Stefan, after all. Rather, he’s Stefan’s identical twin no one knew about. Not even his own mother, Vivian. Ivan explains how and why he hid Jake from the DiMeras all these years.

Gabi struggles to accept that her husband, Stefan, actually IS dead.

Not only is Sami shocked to find out that her daughter is pregnant, Allie’s plan to give the baby up for adoption is another blow. Allie plans to give the baby to her former step-father, Rafe. Sami shuts that down by demanding that Rafe turns down Allie’s offer.

Will DOOL‘s Rafe abide by his ex’s wishes or will he adopt Allie’s baby?

Jack is Shocked After Run-In With Bonnie

Judi Evans is back in Salem! But not as her beloved character Adrienne. Rather, she’s playing Adrienne’s look-alike, Bonnie. DOOL‘s Justin ran into Bonnie after his broken wedding ceremony to Kayla.

This week, Jack (Matthew Ashford) runs into Bonnie. As fans know, Jack and Adrienne are siblings. Last time Jack saw Adrienne, he had amnesia and didn’t know her. As a result, he is stunned to run into someone who looks exactly like his dead sister.

In light of the news that Kristian Alfonso (Hope) is leaving DOOL after 37 years comes another shocking change. Online chatter is heating up that Victoria Konefal, who plays Hope’s daughter, Ciara, is also on her way out.

Twitter user and podcaster, Alan Sarapa, posted the news in a tweet on July 7. While he doesn’t cite his sources, he notes that longtime followers know he’s trustworthy.

Victoria Konefal is gone. There. I said it. Feel free to call me a liar if you wish to look foolish. Longtime followers know I don't openly talk about stuff like this unless I all caps KNOW. You can now start the grieving process. *awkward hug and backs away* #Days

Neither DOOL nor the actress have confirmed the news. It seems odd, considering that Ciara and Ben’s (Robert Scott Wilson) wedding is the next wedding.

Check back with us for updates on all things DOOL.