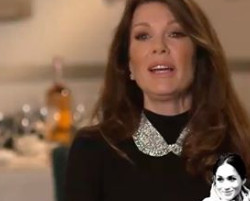 VPR star and former Real Housewife Lisa Vanderpump is breaking her silence about online rumors. For weeks, rumors have been circulating that Villa Blanca is closing. Villa Blanca is one of several L.A. restaurants that Lisa owns. Is the restaurant really closing?

Villa Blanca has been a West Hollywood staple for 12 years now. Owned by restaurant maven, VPR’s Lisa Vanderpump, it is the oldest of her four California restaurants. In addition to Villa Blanca, Lisa owns SUR, PUMP and TomTom in L.A. She also owns the Vanderpump Cocktail Garden in Las Vegas.

In March, all of Lisa’s U.S. restaurants temporarily closed due to the global coronavirus pandemic. Of the restaurants listed above, only the Las Vegas eatery has reopened. California is seeing a resurgence in COVID-19 cases, so Lisa’s restaurants haven’t had a chance to open back up.

Unfortunately, Lisa confirms to The Daily Mail that Villa Blanca won’t be reopening at all. She cites high rent costs, though online gossip sites claim the restaurant is facing bankruptcy after losing a workplace harassment lawsuit. Lisa explains the closure by saying, ‘If the landlord had been willing to renegotiate and the lease wasn’t ending, we would have reopened, but unfortunately with Coronavirus, the situation was beyond our control.’

Lisa says she hopes to transfer Villa Blanca employees to her other restaurants when it’s safe for them to open back up. In fact, she’s even looking into eventually reopening Villa Blanca in a new location.

The VPR star also reveals that even during closure, the Villa Blanca kitchen has been serving meals to the homeless every week. Now, however, she says that good deed will move to one of her other L.A. restaurants.

Lisa’s former RHOBH co-star Kyle Richards fielded questions earlier this week about the rumors about Villa Blanca. She said that she wasn’t surprised by the rumors, given how hard L.A. has been hit during the coronavirus pandemic.

While Lisa didn’t address Kyle’s comments to The Daily Mail, she took aim at the gossip blogs spreading rumors. As we mentioned, gossip blogs have been speculating that a loss in court was the reason behind Villa Blanca’s closing. Even mainstream outlets such as People and Screen Rant published articles about the rumors.

Lisa takes issue with the online gossip. She says, “Although there have been many untrue articles in the past week or so about the reasons for closing Villa Blanca, we are indeed going to be closing up our doors for good.”

She goes in on the outlets even further, shaming them for publishing gossip. Lisa says, “Reputable news sources shouldn’t quote untrue facts printed in gossip columns.”

Her comments are slightly ironic since her friendship with Kyle Richards ended over Lisa allegedly selling negative stories about RHOBH co-star Dorit Kemsley to the gossip columns. That’s an allegation Lisa has faced before on the Bravo show. She quit RHOBH after Season 9 due to the accusations made by Kyle and the other women.

Did VPR Star’s Restaurants Get PPP Loans From the Government?

Interesting… @LisaVanderpump has been sitting on up to $2.7 million in PPP bailouts from the federal government… for almost three months. This says she employs 280 people. All her restaurants remained closed. This is public information: https://t.co/pq8timxxZf pic.twitter.com/YIcACeLS3J

Lisa isn’t the only celebrity who received the payments. Iconic actor Robert De Niro allegedly received millions in aid for his Nobu restaurant, Us Weekly reports.

One Twitter user replied to the allegations against Lisa by pointing out that despite the VPR star’s wealth, her restaurants are small businesses, and therefore eligible for the loans.

The Real Housewives of Beverly Hills airs, without Lisa, Wednesdays on Bravo. Vanderpump Rules fans are still waiting for Bravo to confirm whether it will return for Season 9.