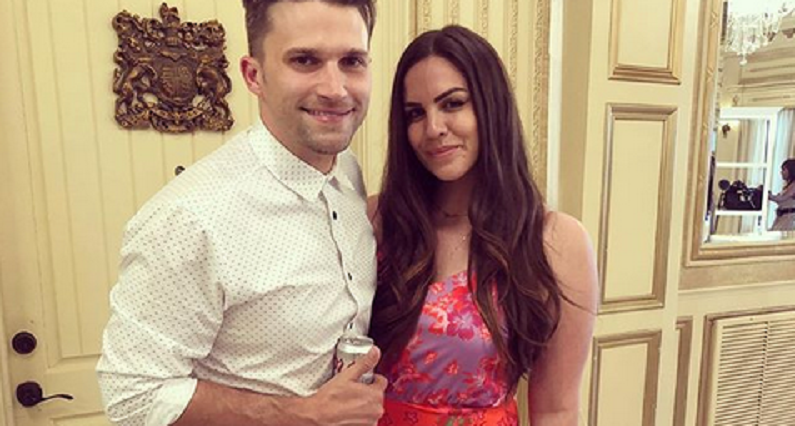 Vanderpump Rules star Katie Maloney defended her man. She made it clear that she doesn’t have time for haters. She also has no problem standing up for her husband Tom Schwartz. The 33-year-old Bravo star fired back at his haters on social media.

It all started when Katie shared an adorable photo with her husband. She shared the details of his romantic proposal from five years ago. While most fans left adoring comments for the couple, others decided to throw shade at Tom’s lack of performance between the sheets. Katie doesn’t like it when trolls talk about their intimate life.

Katie Maloney stands up for her husband Tom Schwartz

As per The Blast, Katie Maloney celebrated their anniversary with a sweet Instagram post. In the throwback post, Katie gave Tom Schwartz a kiss on the cheek. The couple is seen celebrating at an event with confetti thrown on them. Tom wore a vest and tie over a white button-down shirt. Meanwhile, Katie wore a simple black dress.

“I love when memories pop up in my phone!” Katie captioned the cute photo. “Even though this was July 7th, it was 5 years ago that Tom proposed.. I still remember it like it was yesterday.”

The couple is approaching their tenth anniversary. Katie told her fans that this “summer is also 10 years since we fell in love.” She realized that what she wrote is “cheesy,” but she doesn’t care. Tom responded to his wife by teasing her about his proposal, “The ol fakearoosky!”

Most Vanderpump Rules fans dubbed them as their “favorite couple” on the show. However, there is always one troll in the bunch. The Instagram user aimed for the couple’s lack of intimacy. Every season it’s been a sore subject on the Bravo reality show.

The hater commented, “Schwartz ain’t hittin that right…” Katie responded, “Your commitment is unrivaled.” She hinted that the troll came for Tom before. Several VPR fans applauded Katie’s clever clap back.

Katie Maloney made her big return to social media. She shared her first selfie since the Vanderpump Rules firings. As per The Blast, Katie took to Instagram Stories to let fans know she’s been taking good care of herself amid the coronavirus pandemic. Bravo fired Stassi Schroeder and Kristen Doute after a racist incident involving former SUR waitress Faith Stowers.

Like her fellow co-stars, Katie kept quiet about the scandal. She only broke her social media silence to address the Black Lives Matter movement. On Instagram Stories, Katie shared the first selfie on social media. She smiled brightly as she wore a light shield while practicing self-care. She captioned the selfie to let her followers know that she’s been taking good care of her skin.

It’s time for the #pumprules Finale! What a freakin season y’all!!!

“Trying out the @dmhaesthetics light shield,” Katie captioned the photo. “I have been using the @drdennisgross light mask for a year now and I just LOVE light therapy.”

While this is the first selfie that Katie Maloney posted on social media since the firing scandal, she continues to interact with followers. She also slams the haters at any given chance.

Amber Portwood Reveals The Positive Life Changes She Is Making
Isabel Roloff Reveals Secret Baby Bump Progression Pictures
Kyle Chrisley Reflects On Betraying His Father
‘When Calls The Heart’ Season 9 Has Started Filming: All The Details
Khloe Kardashian & Tristan Thompson Spending Time Together: Are They Back Together?