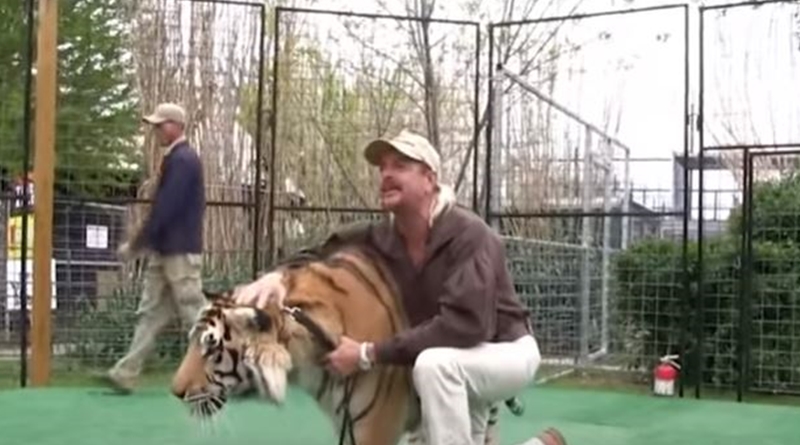 Tiger King on Netflix drew a huge audience. Plenty of people, including TMZ speculated on the guilt of Joe Exotic regarding Carole Baskin’s husband’s disappearance. Now, news emerged that police suspected human remains on the zoo property. It came after cadaver dogs indicated an alligator pit might hold them. But, an update late on July 10 shows that apparently, they found no human remains.

The Tiger King investigation followup went down on Friday “at the Greater Wynnewood Exotic Animal Park,” the outlet reported. The Oklahoma State Bureau of Investigation, along with Garvin County Sheriff’s deputies responded to the park Friday evening to search for “possible human remains.” It came after filming for Ghost Adventures, Jeff Lowe told KOCO 5. Part of the filming included cadaver dogs on the site. The dog handlers totally thought the dogs hit on human remains.

No human body parts found in the alligator pit

After the call to the cops that the dogs scented body parts, teams of agents from various law enforcement turned out. OSBI went along because the Sheriff’s office requested their presence. Apparently they carried out a lot of digging. However, they turned up empty-handed. Apparently, the investigation regarding the human remains in that location is now closed. For now, nothing much changes for Exotic Joe who previously owned the park.

His conviction in April last year keeps him in jail for the next 22 years or so. He got sentenced and found guilty on charges of conspiring to kill Carole Baskin. Fans of Tiger King know that Carole’s an animal activist. Exotic Joe also got time for killing tigers and offering cubs for sale. At the end of it, he lost his liberty and his zoo. Carole founded the Big Cat Rescue Corp, which then took over management of the place. Soon the animals get removed from the property.

On the video shared by ABC of the TMZ report, fans thought nothing might come out of it. One fan wrote, “The smell of death from the Alligator Pit…. maybe they were eating nothing burgers.” It turns out they nailed it. Other fans wondered if the police might find “the missing husband.” But, nothing new came to light.

Remember to check back with us often for more news about Tiger King from Netflix.