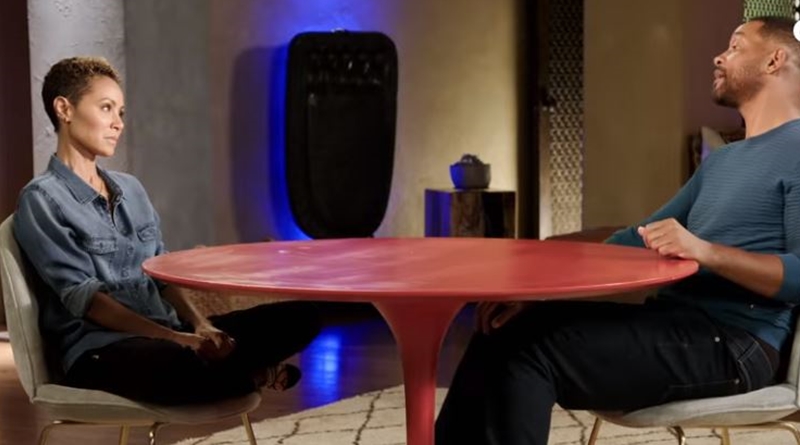 Jada Pinkett-Smith roasted Shane Dawson on social media in late June, and now she gets roasted herself on Twitter. She and Will Smith took to the Red Table on Facebook and talked about how August Alsina claimed Will gave him permission to have an affair with Jada. Recall the news broke via The Breakfast Club with Angela Lee. Twitter went crazy with memes and jokes about the admission by Jada.

Jada Pinkett-Smith trends after admitting a relationship with Alsina

On Facebook, Jada and Will talked about the allegations by Alsina. Their biggest worry seemed to revolve around the fact that the media misquoted them. Or, in some cases, said things neither of them ever said. According to Will, fake news comes on any headline where Will or Jada said anything. That’s because neither of them ever said anything. Jada didn’t even wish to talk about it at all. If she got together with August Alsina or not isn’t anyone’s business. But as Will pointed out, “Black Twitter made it their business.”

Jada Pinkette-Smith said she and August started a friendship about four years ago. It started when she helped him with his mental health. Will pointed out that in fact, he seemed “really sick.” The family gave him nothing but love. But things went south between Jada and Will. Laughing, Will said, “I was done with you.” The couple decided on a period of separation and split up. In fact, both of them thought their marriage ended. During that time of separation, she and August got a lot closer, and at first, she called it an “entanglement.”

This is the final step looks like before it becomes a crime of passion…. #BeCarefulOfMe #redtabletalk #WillSmith pic.twitter.com/10ZQlQVLMQ

Jada gave herself permission not Will Smith

The news media focus on Will supposedly giving August permission for an affair with his wife. Jada claims that’s nonsense. The only person who gave permission was herself. Jada feels August maybe followed the permission line so people didn’t see him as a “home wrecker.” Jada admitted, “yes, it was a relationship, absolutely.” But, only after Will pushed her to explain what she meant by an “entanglement. “After much talk, basically, both of them healed and rediscovered each other. August is history.

Twitter went a bit crazy and trended Red Table Talk across the world. Well, not long ago Twitter roasted Shane Dawson when Jada Pinkett-Smith complained about the YouTuber. Back then, she slammed him for sexualizing Willow Smith. The video really was not fit for a family magazine as he pretended to get off over a poster of then 11-year-old Willow. Now, in kinder sort of way, Twitter roasted Jada. Plenty of comments and memes flooded the platform.

Will never went unscathed either. One person commented, “I bet all the closure Will needed was that 12:51 #redtabletalk, Dude had some side pieces y’all dont even know about. #entanglement.” Some people still feel that despite their separation, Jada Pinkett-Smith still cheated. One person noted, “Jada is just a b*tch. first it was 2pac n then Alsina. She doesn’t deserve someone like Will Smith. she called cheating #entanglement on the #redtabletalk wow.”

Some people seemed a bit kinder to both of them, though. This person noted: “Wen it comes to Jada’s #redtabletalk I wish people were spiritually woke enough to see that EVERY relationship u should learn and grow from. So many people think she used him to heal herself when in reality she LEARNED from that relationship what she needed to change w/in herself.”

It looked like a relationship on the surface 😂😂😂😂 it was just an entanglement 🤦#redtabletalk#willandjada https://t.co/Qm9BkWQZfm

Jada Pinkett Smith and Will no doubt move on, but Twitter will probably thank them for years for giving them some laughs on a Friday night. Sound off your thoughts in the comments below.