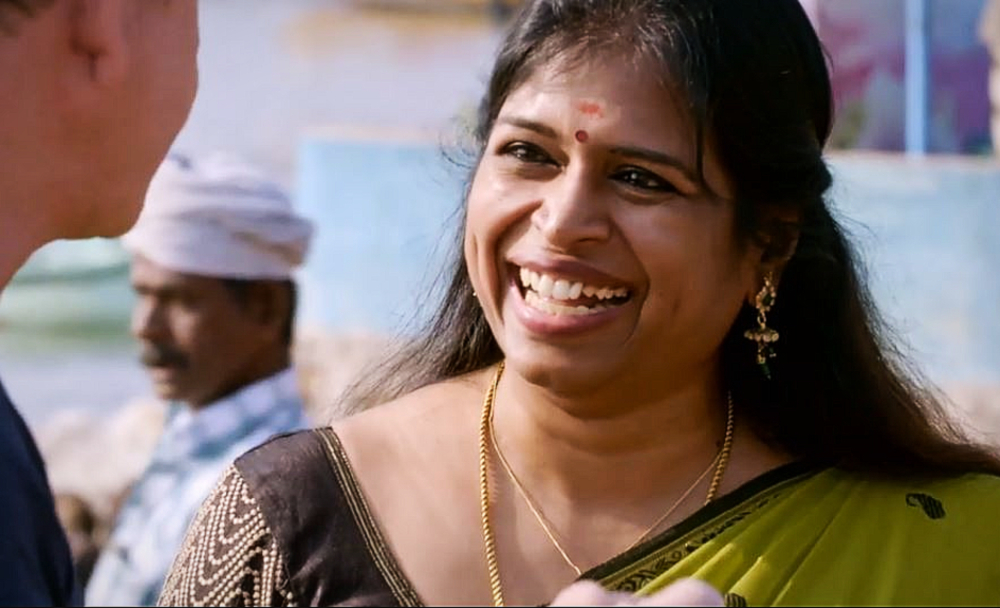 The heat is on for chef Gordon Ramsay.

In the latest Gordon Ramsay: Uncharted a renowned Indian chef, Shri Bala, introduces the tall Scot to fiery cuisine that relies on native chillies and spices to use in everyday meals.

But an everyday meal is not what Gordon is planning.

He will prepare a more sumptuous Tamil feast for local notables in bid to master the area cuisine and earn some credibility.

Uncharted is a test of Ramsay’s skill sets as a chef who can learn, adapt new techniques and ingredients to his already enviable classically trained repertoire.

And this week, we head to steamy southern India where the spice trade still is a vital part of their economy.

We learn that their local food legend is a woman who did not start out to become a chef initially. Shri Bala was educated to be an accountant and then lawyer, who then morphed her career path into cooking later in her life.

Shri Bala is a jovial and demanding chef, as well as a passionate food historian for the many regions of Indian cuisine. She is also a television host who comes from an Indian food dynasty.

Shri is Gordon’s esteemed guide to the spices of southern India, giving him a lesson in the history of the spice trade that laid the groundwork for India to become the top producer and exporter of spices in the world today.

Also on the episode another Indian woman, Fancy, is also introduced to Gordon.  She runs a local coffee plantation and is the leader of the collective of 500 female artisans Gordon cooks for at the end of his time in India.  She instructs Gordon on how she makes her famous coffee liqueur, which he will incorporate into his final feast cooked alongside with chef Shri Bala.

Spices that the Southern regions use, how did they develop over time and for what reasons as compared to a more northern or colder climates?

Shri Bala: Black Pepper, Cardamom, Clove and Cinnamon have reference to documents as old as 4000 + years. Nutmeg, Star Anise, Bay leaf, mace appear to have been added to Southern Cuisine subsequently with evolution of time.

Oil plays a vital role in determining whether the region is south or north. South Indian oils are basically body coolant and North Indian oils are heat generator, they are mother nature’s best gift to mankind.

For example, whenever a region is arid or tropical there will be usage of fennel, as it is a natural body coolant.

Explain to woefully behind American audiences about Tamizhaga Ula, the journey around Tamizhagam, of Tamil Nadu, Kerala, Andhra Pradesh and Karnataka,and why this is important to you?

Sangam period is very important for Southern Peninsula because the languages were evolved and refined, and international trade developed. Cross culture between countries got established and cuisine developed.

Muziri is a mythological port in Kerala which was supposedly the busiest port during Sangam, even before Sangam. Egyptians used to come through Red Sea to pick black pepper for mummification as black pepper helped the mummy from decay.

They used to pay in gold in exchange of black pepper…hence black pepper is called black gold.

There was a great rapport between the Greek, Egypt and Southern Peninsula during this period and subsequently, the Arabs became the major traders thus a community called Mophla was developed who were the descendants of these Arab traders.

Till date, this Muslim community is a matriarchal community. During the Sangam period, Sangam Literature got developed and Tamil, my mother tongue, got its grammar, several epics by poets. These poems show us the annals of history.

Personally, this is very important to me as I curated my dishes based on the ingredients mentioned in Sangam literature. It helped me revive the ancient cuisine which was based on the concept “your food your medicine.” Eating was scientific which lead to healthy lifestyle.

Northern Indian cuisine is different from Southern primarily by what defining features? How many regional styles of cooking are there in India overall?

Shri Bala: India is a vast country and has 28 states and eight union territories. As the saying goes, for every 50 kilometers, the cuisine changes. Under each state there are several regions.

For example, Karnataka has five different languages and several regions. So, learning becomes a perpetuity. I am trying to learn as much as possible from Southern India and its regional cuisine.

This is something I have heard other Indian chefs talk about: Why are Americans so slow to adopt more Indian cuisine varieties, like they have in the UK?

Shri Bala: The palate is very subjective and Indian cuisine has strong flavours.

The core spices of the Tamil kitchen for chefs and cooks to call upon are…?

South Indian food and the region are famous for idlis, vadas, dosas and sambar- describe the core go-to meals and dishes of your region

Shri Bala: Idli, Vada, Dosa, Sambar are just a tip of the Iceberg.  Biryani is a key ingredient that supports a healthy central nervous system in South India.

Each region has its own version of Biryani with a variety of flavours and cooking techniques. Varied Sea food, Red Meat dishes are very popular.
Vegetarians are not left behind as this land is known for its native vegetables and tubers with lentils and numerable rice varieties.

How did you venture into becoming a chef after studying law and accountancy?

Shri Bala: Cooking has always been my passion and I’ve been cooking from the age of nine. I was trained by my mother and my uncle, the son of Illustrious cookbook author.

I lost my parents one after the other in a span of 2 years between 2013 and 2015. I was going through difficult times in 2015, I was working as head finance of the law firm. Aimlessly I resigned my job end of 2015 with no game plan in my mind.

I met my guru chef Ashish Bhasin in social media while I was posting my food pictures in social media. This chanced meeting helped me kindle my interest in food and I challenged him, a Punjabi Chef saying Indian food scenario is biased with Punjabi food.

He did not take it offensive… instead told to me refer [him] a good south Indian chef so that he can work with him to represent South India in North better. I told him why would I refer to a chef when I can cook.

The parley went back and forth because of my non-culinary background and he is an executive chef of a 5-star hotel. It is mandatory for a star hotel to have chefs from Hotel Management Institutes.

But I did not get deterred; I made a presentation for what South Indian Food is all about. He took my case with his General Manager due to my constant nagging; I must have been a pain in the a**. I took my trade test and qualified on spot and thus I started my culinary journey.

Please break down this quote of yours for me with a bit more context and explanation, “These curries are prepared to keep in mind the six dimensions of tastes, five elements of nature (which are..) and seven chakras of the human body so that it does not provoke the ayurvedic doshas namely the Vata, Pitta and Kapha (these are body types?) ”

Shri Bala: Ayurveda” means “Science of Life and Longevity”. The body is made up of five elements of nature, in order to balance these elements at appropriate levels we need to upkeep the seven chakras, which are yogic representation of endocrine glands.

Each of the organs are linked to emotions and elements of nature and are activated by six tastes. So, let’s eat five, six and seven.

The Uncharted filming happened at different locations in Kannur district in Kerala, and in Coorg in coastal Kannur. Why is this area the spice center of India?

Shri Bala: Due to the nonexistence of Muziri Port, Calicut Kannur Port got develop for trade. Arabs frequented these ports and Vasco da Gama landed in Calicut. Black Pepper grows in abundance in this area for which traders swamped from far and wide.

What better location other this area could be suited for a program like Uncharted.

Throughout the episode, chef Gordon Ramsay learns traditional dishes, including Kandhari chilli fish curry and pork (Pandi) curry blended with bitter lime. In Coorg, he samples traditional liqueur, and tastes their ware. What other dishes did you teach him?

How did meeting Chef Gordon Ramsay go, was he different than you thought he might be?

Shri Bala: Every person dreams at least to click a picture with him. It was a dream run for me to work him in this show and I was lucky. Personal experience is totally different from his onscreen persona.

My thought took a tangentially turn after meeting him in person. He was very sweet to work with and he made a cute video for my daughter, who had written letter to him.