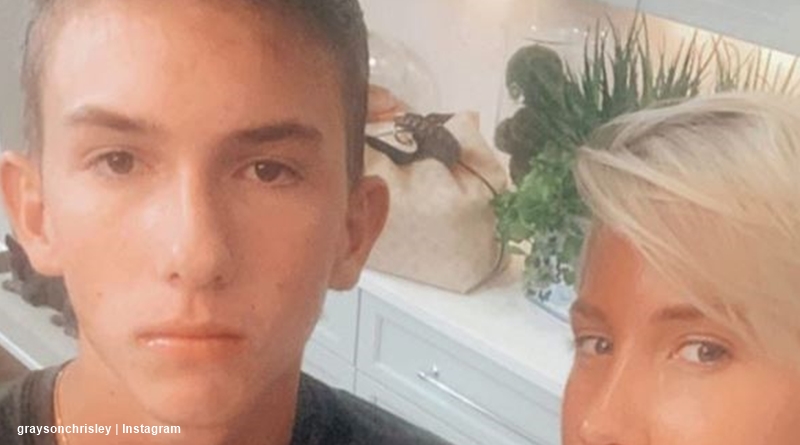 Chrisley Knows Best dad, Todd started Grayson’s Instagram account in 2016. A few photos went up there that year and then stopped altogether. On Friday, the first pictures in four years went up and his account becomes active again. Some fans think that Todd originally opened it up for his son as a placeholder rather than an active account.

In 2016, word came out that plenty of fake people ran accounts under the name of Grayson. Grayson’s official account opened and run by Todd and his son shows the verified mark. Chase, Grayson’s big brother, reminded fans the account exists. On Friday, he posted a photo of Grayson. His caption read, “Everybody! @graysonchrisley is back on Instagram!! Everyone go follow him @graysonchrisley.” Some fans wondered why Grayson hardly ever posts anything.

But, Grayson was still very much a kid when it first opened up. At ten-years-old back them, those who speculate that Todd opened it as placeholder are probably correct. With Grayson growing up now, Chrisley Knows Best fans might see more of him on the account. One fan wrote, “I’m following you Grayson cuz I love The Chrisley’s show🙌🏼.” Now 14, Grayson hangs with the older guys in the family a bit more. In October last year, Todd Chrisley, Kyle, Grayson, and Nic Kerdiles enjoyed a guys’ night out, we reported.

On Friday, two posts went up on Grayson’s Instagram. The first one showed him playing baseball. He captioned it with, “That moment when you know it’s gonna be smoke . The account still says that Todd manages the account closely for Grayson. And clearly, that’s a give-away punctuation error at the end of the caption. Todd Chrisley’s renowned for leaving a space after the last letter of a sentence and the punctuation.

The second post showed the young Chrisley Knows Best star with his sister Savannah. The caption read, “She’s been my best friend my whole life and I am glad for that , I love you @savannahchrisley.” Once again, the spacing around the punctuation clearly reveals that Todd probably put up the post. Some fans responded, and they welcomed Grayson to Instagram. But, it looks like they basically see Todd’s posts about his son. Maybe in time, Grayson starts posting some of his own stuff on there.

That moment when you know it’s gonna be smoke .

Popculture reminded fans that the show returned with Season 8 to the USA Network on July 9. In the show, much focus goes on Savannah as she backed off marrying Nic Kerdiles for the time being. Plus, fans see that Grayson’s grown up a lot. The young teen sends a clear message to his family that “he’s done being treated like a kid.”

One fan of Chrisley Knows Best suggested that Grayson change his Instagram profile bio. It reads, “The official Instagram account of Grayson Chrisley, This account is run jointly by Grayson and @toddchrisley, Grayson’s dad.” That fan felt the profile shows that Grayson might be done with being treated like a kid, but he obviously still is one.

Remember to check back with us often for more news about Grayson and Chrisley Knows Best.